A collection of David Allen Quotes to help you get things done! 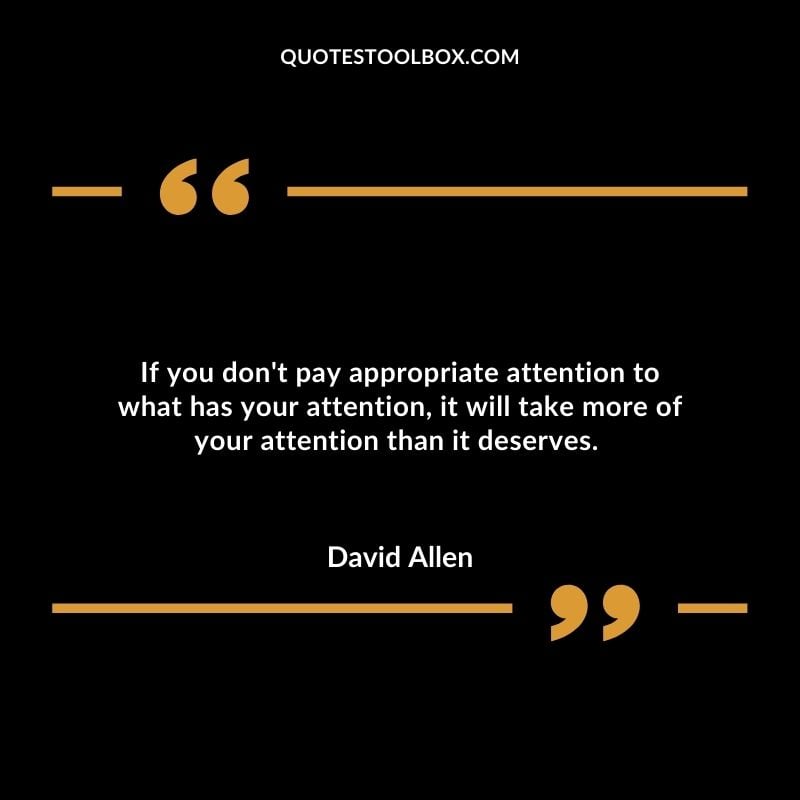 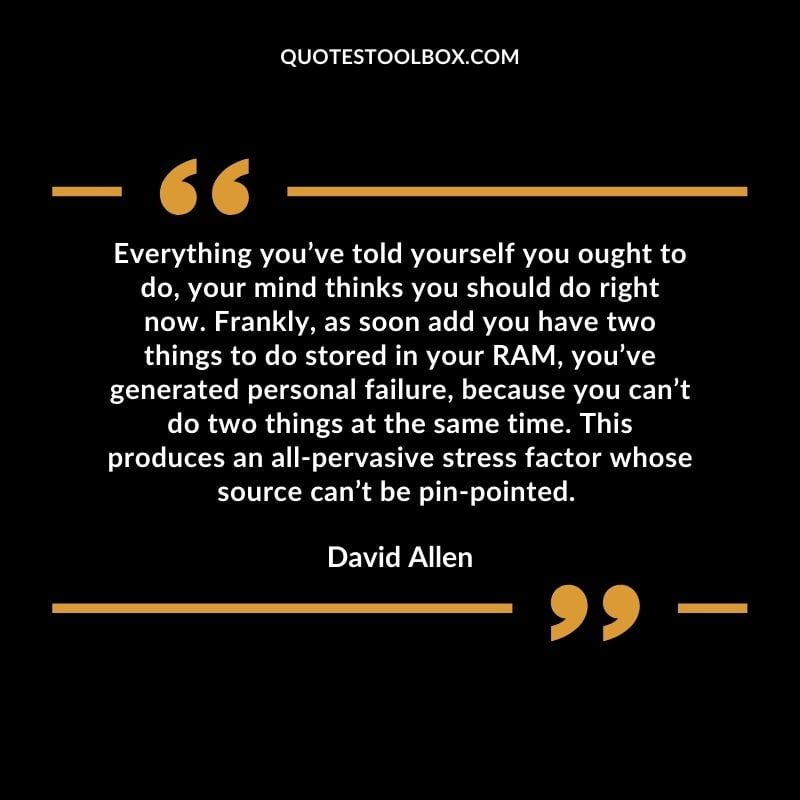 Everything you’ve told yourself you ought to do, your mind thinks you should do right now. Frankly, as soon add you have two things to do stored in your RAM, you’ve generated personal failure, because you can’t do two things at the same time. This produces an all-pervasive stress factor whose source can’t be pin-pointed. David Allen 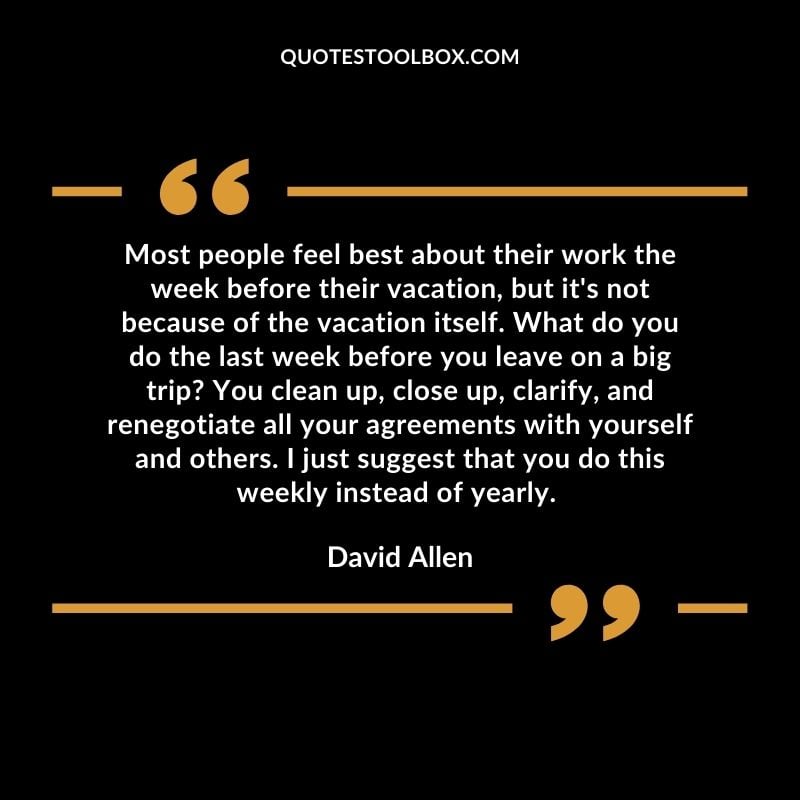 Most people feel best about their work the week before their vacation, but it’s not because of the vacation itself. What do you do the last week before you leave on a big trip? You clean up, close up, clarify, and renegotiate all your agreements with yourself and others. I just suggest that you do this weekly instead of yearly. David Allen

Much of the stress that people feel doesn’t come from having too much to do. It comes from not finishing what they’ve started. David Allen
You can fool everyone else, but you can’t fool your own mind 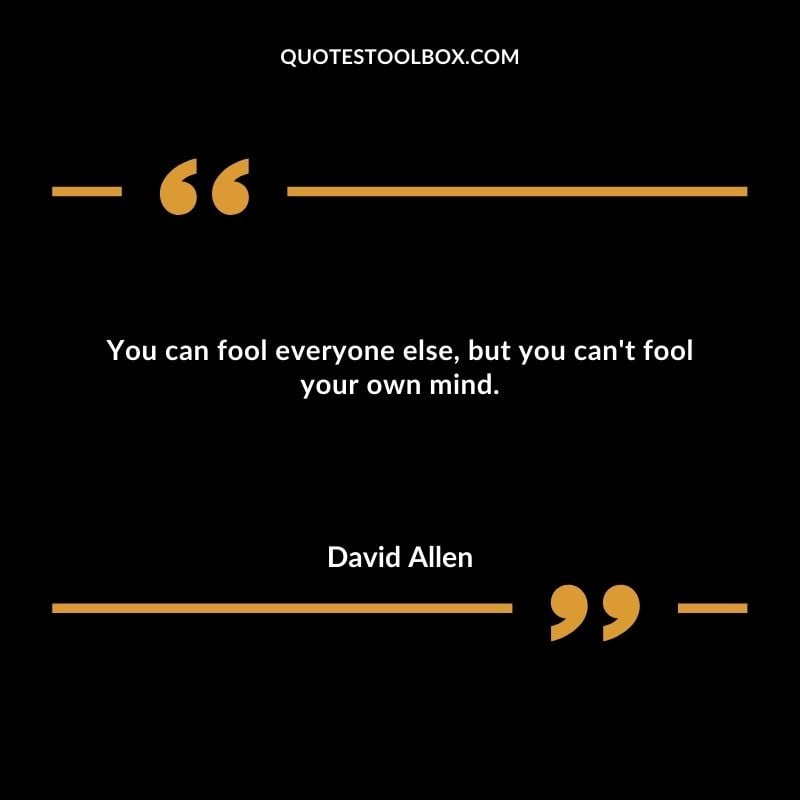 You can fool everyone else, but you can’t fool your own mind. David Allen 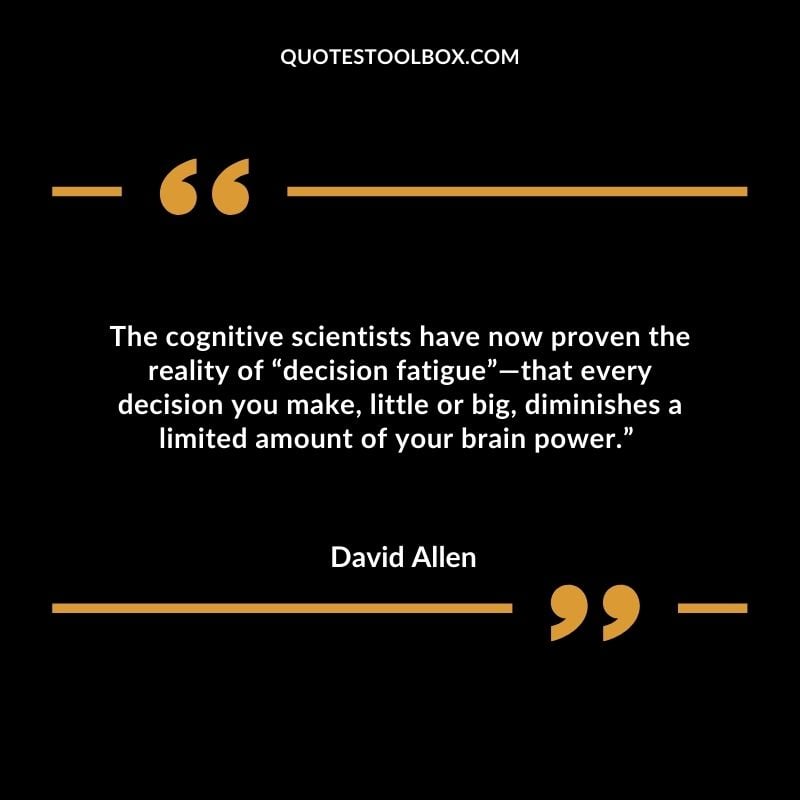 The cognitive scientists have now proven the reality of “decision fatigue”—that every decision you make, little or big, diminishes a limited amount of your brain power.”  David Allen Quotes 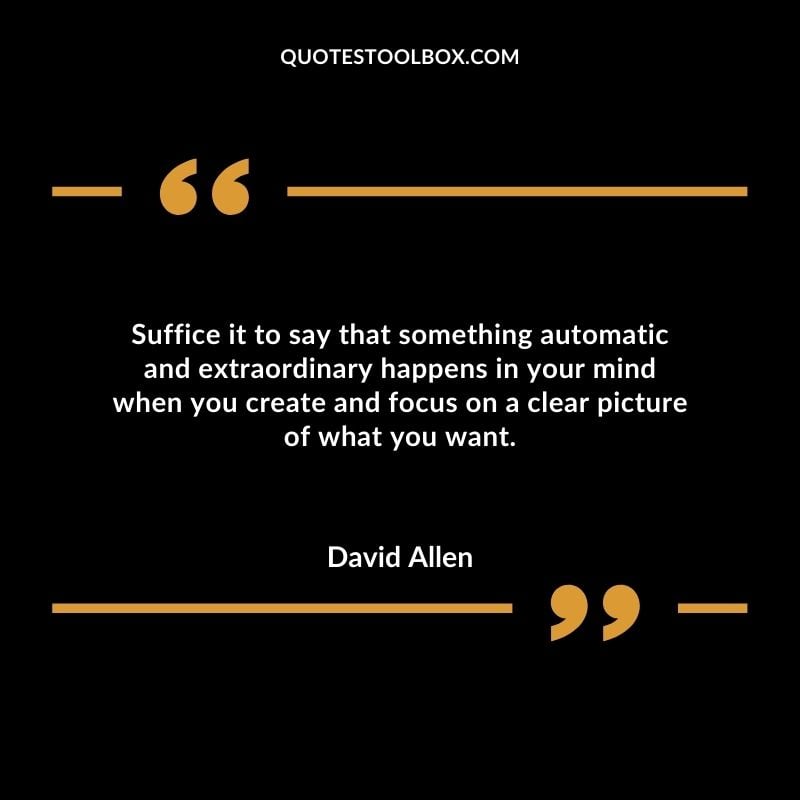 Suffice it to say that something automatic and extraordinary happens in your mind when you create and focus on a clear picture of what you want. David Allen 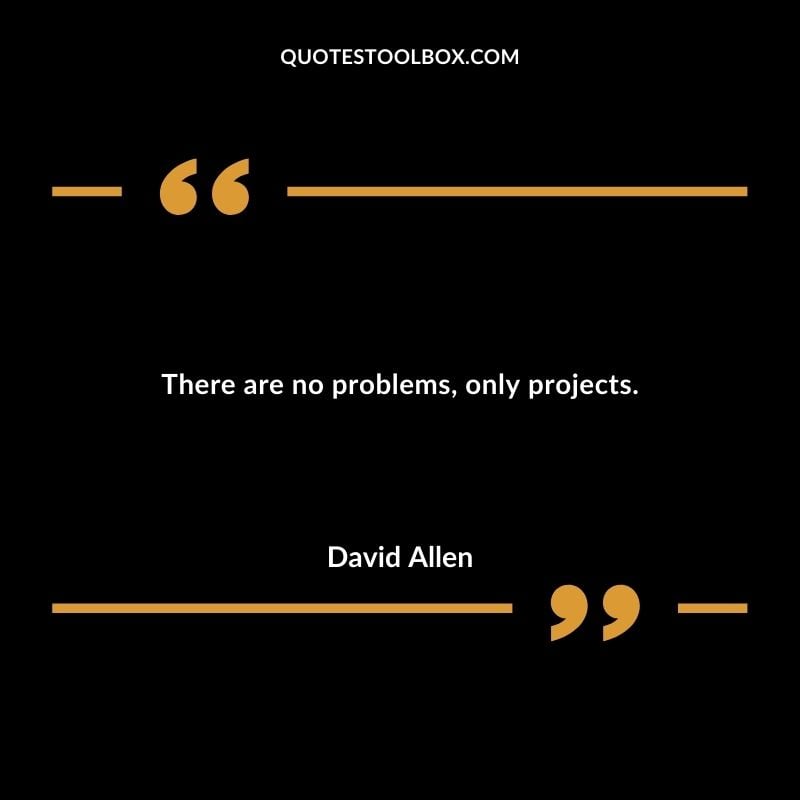 There are no problems, only projects.  David Allen

One of the biggest problems with most people’s personal management systems is that they blend a few actionable things with a large amount of data and material that has value but no action attached.  David Allen 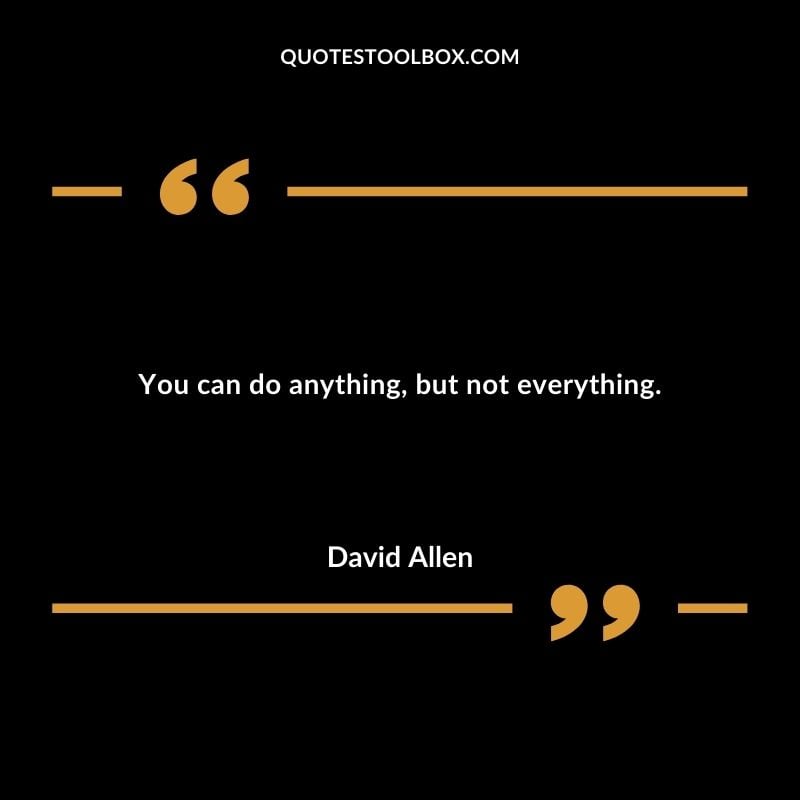 You can do anything, but not everything. David Allen 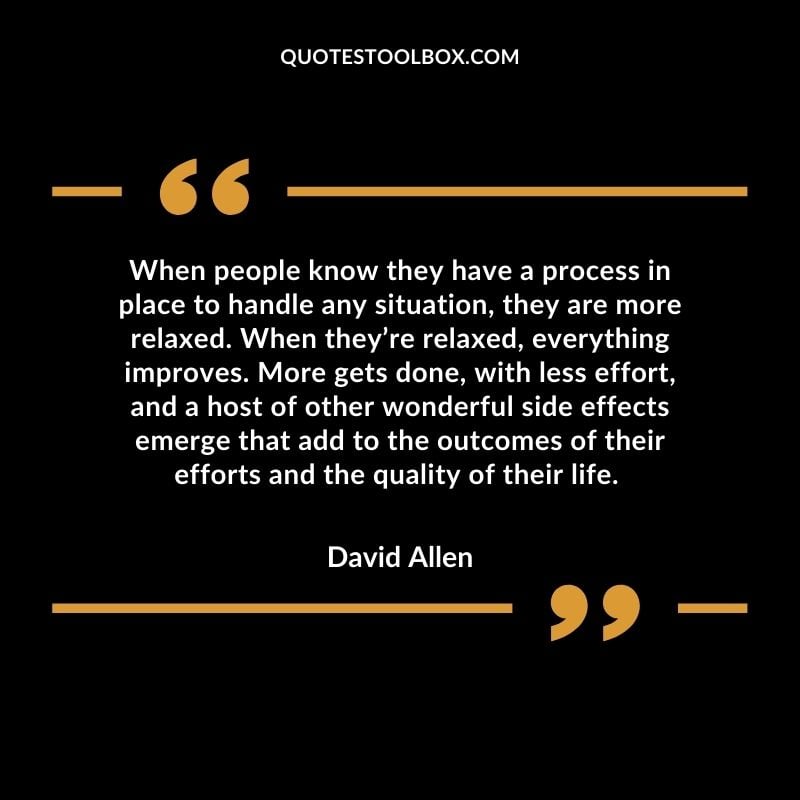 When people know they have a process in place to handle any situation, they are more relaxed. When they’re relaxed, everything improves. More gets done, with less effort, and a host of other wonderful side effects emerge that add to the outcomes of their efforts and the quality of their life.  David Allen 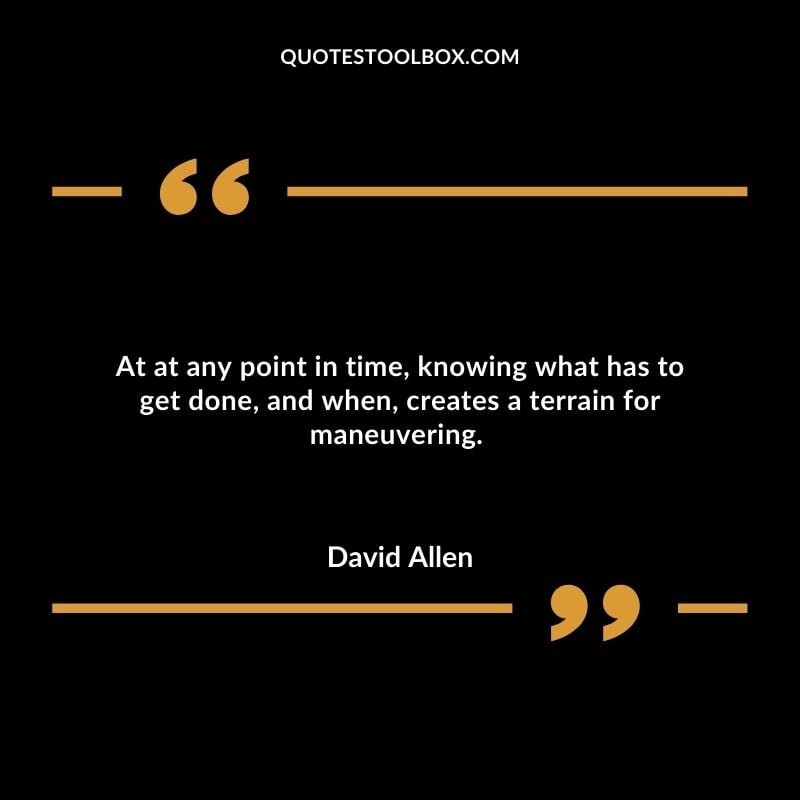 At at any point in time, knowing what has to get done, and when, creates a terrain for maneuvering. David Allen 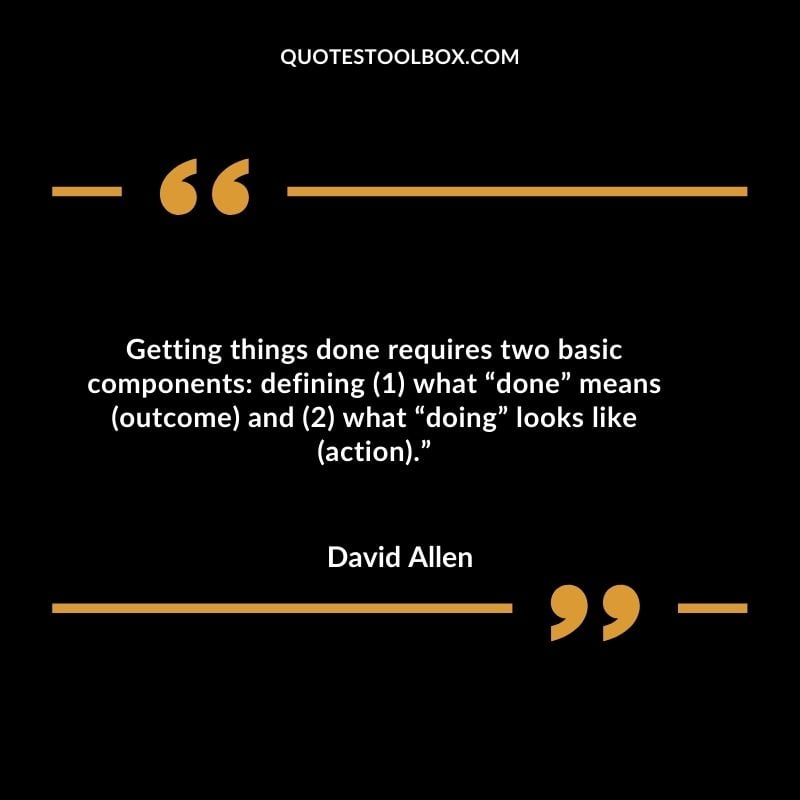 Almost every project could be done better, and an infinite quantity of information is now available that could make that happen. David Allen Quotes 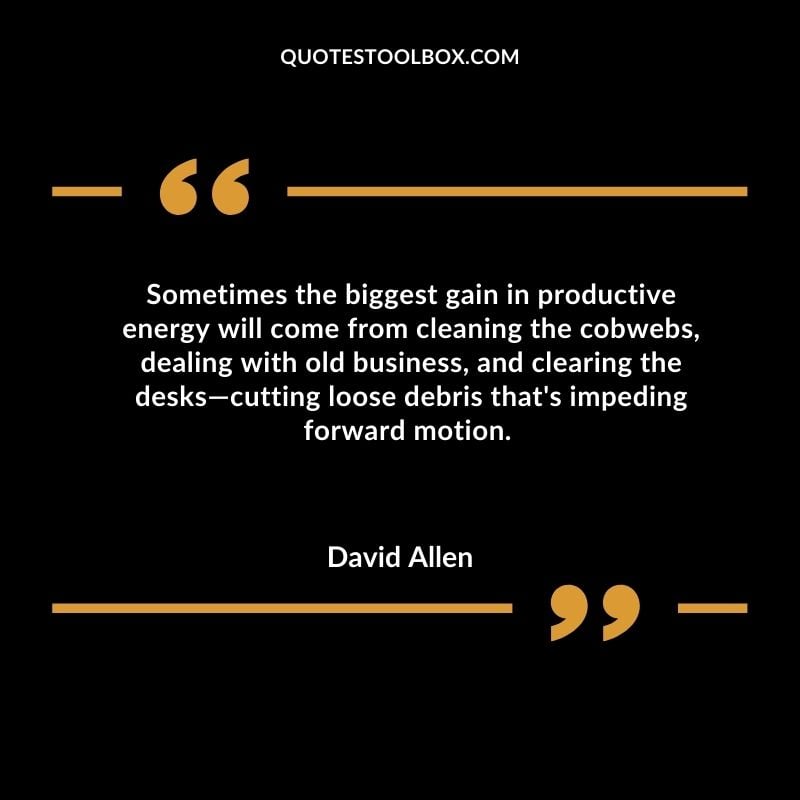 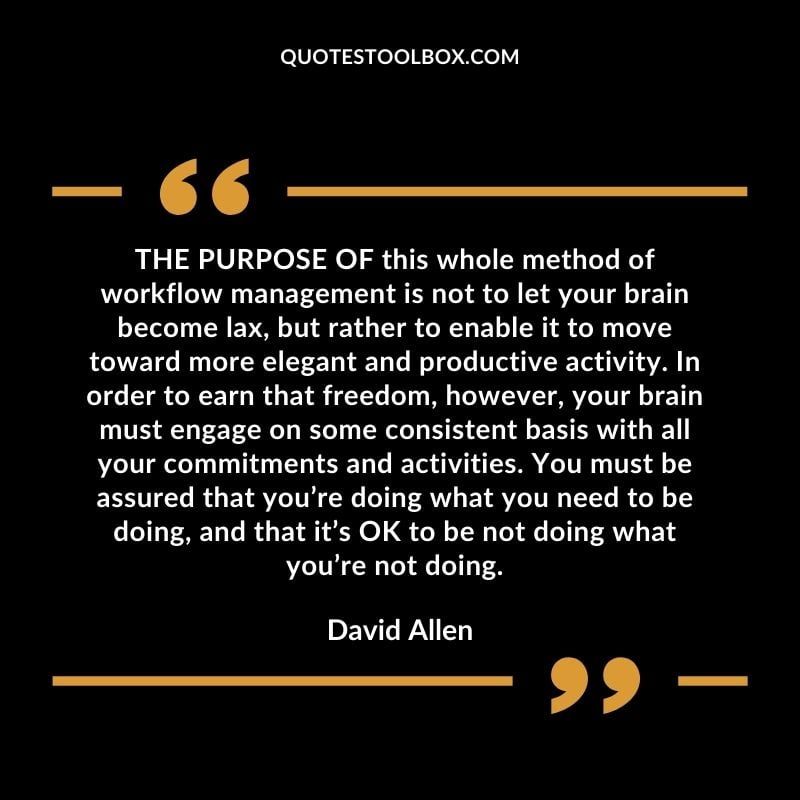 Your life and work are made up of outcomes and actions. When your operational behavior is grooved to organize everything that comes your way, at all levels, based upon those dynamics, a deep alignment occurs, and wondrous things emerge. You become highly productive. You make things up, and you make them happen.”  David Allen

The great secret about goals and visions is not the future they describe but the change in the present they engender. David Allen Quotes 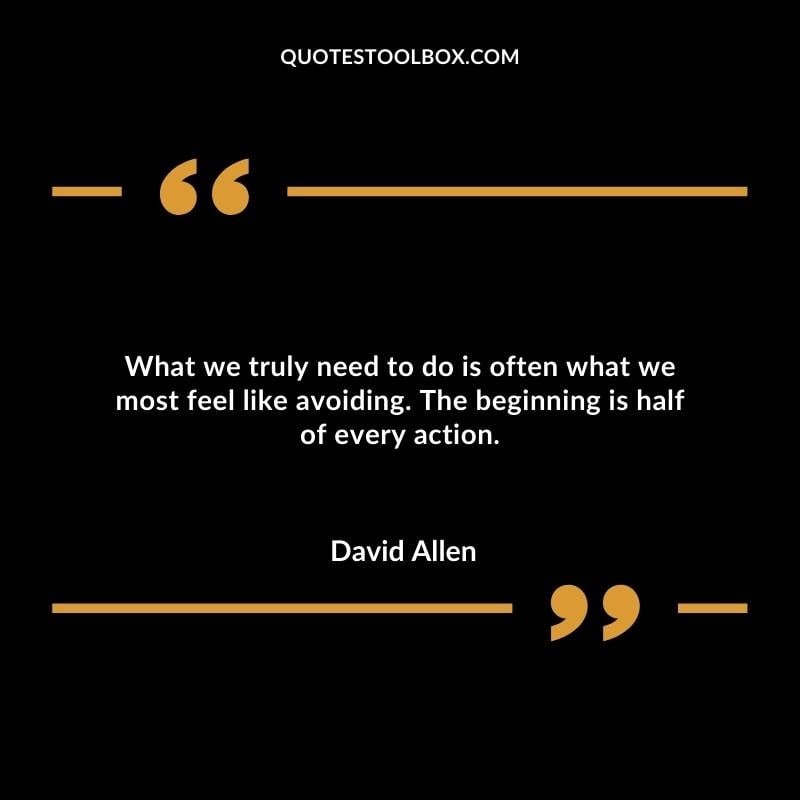 What we truly need to do is often what we most feel like avoiding. The beginning is half of every action. David Allen 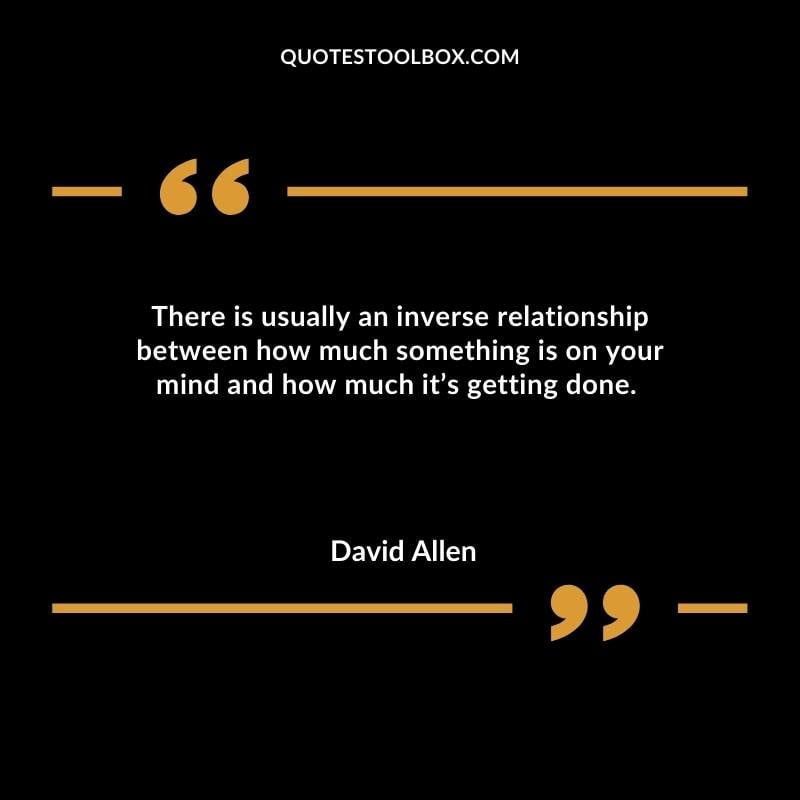 There is usually an inverse relationship between how much something is on your mind and how much it’s getting done. David Allen 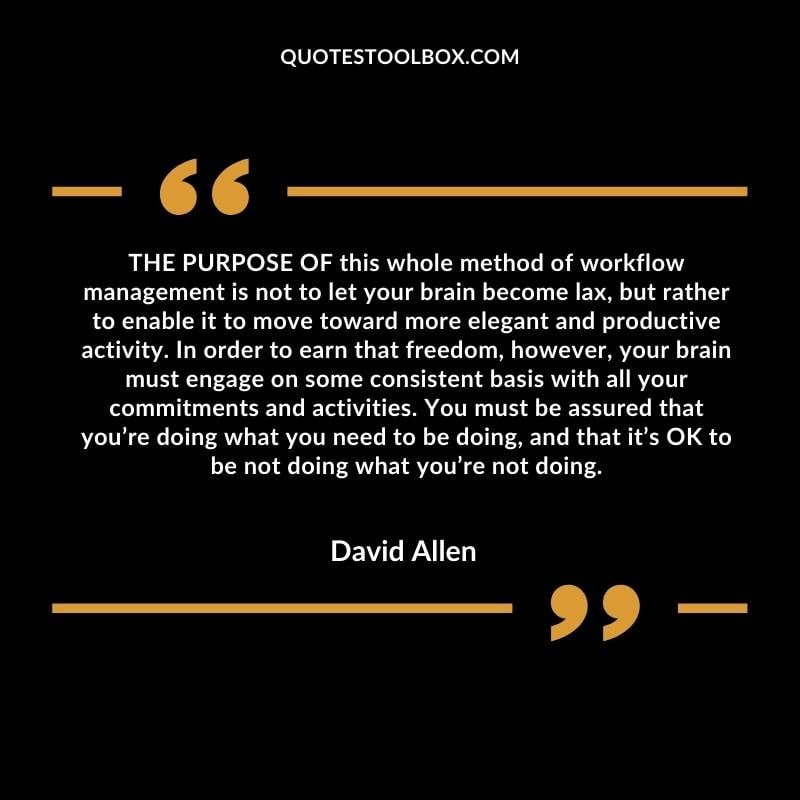 THE PURPOSE OF this whole method of workflow management is not to let your brain become lax, but rather to enable it to move toward more elegant and productive activity. In order to earn that freedom, however, your brain must engage on some consistent basis with all your commitments and activities. You must be assured that you’re doing what you need to be doing, and that it’s OK to be not doing what you’re not doing.  David Allen

There are no interruptions, really—there are simply mismanaged occurrences. David Allen 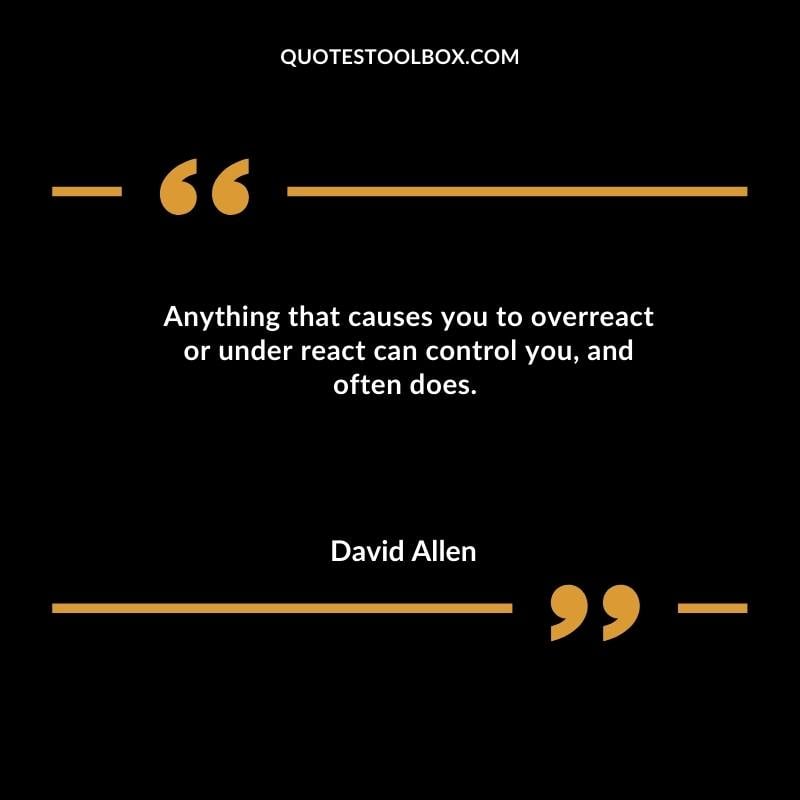 Anything that causes you to overreact or under react can control you, and often does. David Allen

Reacting is automatic, thinking is not.  David Allen 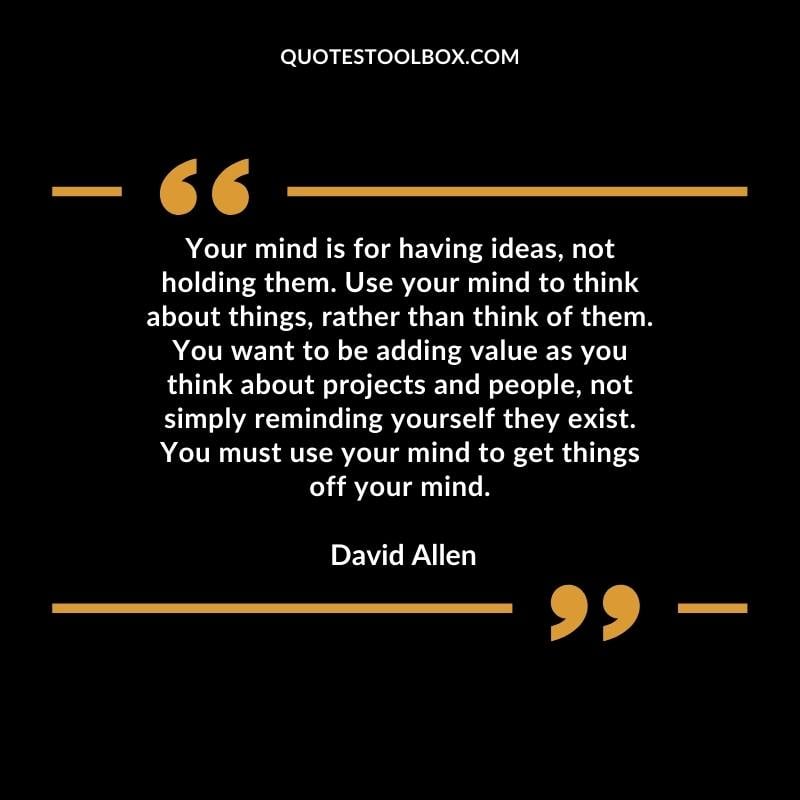 Your mind is for having ideas, not holding them. Use your mind to think about things, rather than think of them. You want to be adding value as you think about projects and people, not simply reminding yourself they exist.  You must use your mind to get things off your mind. David Allen 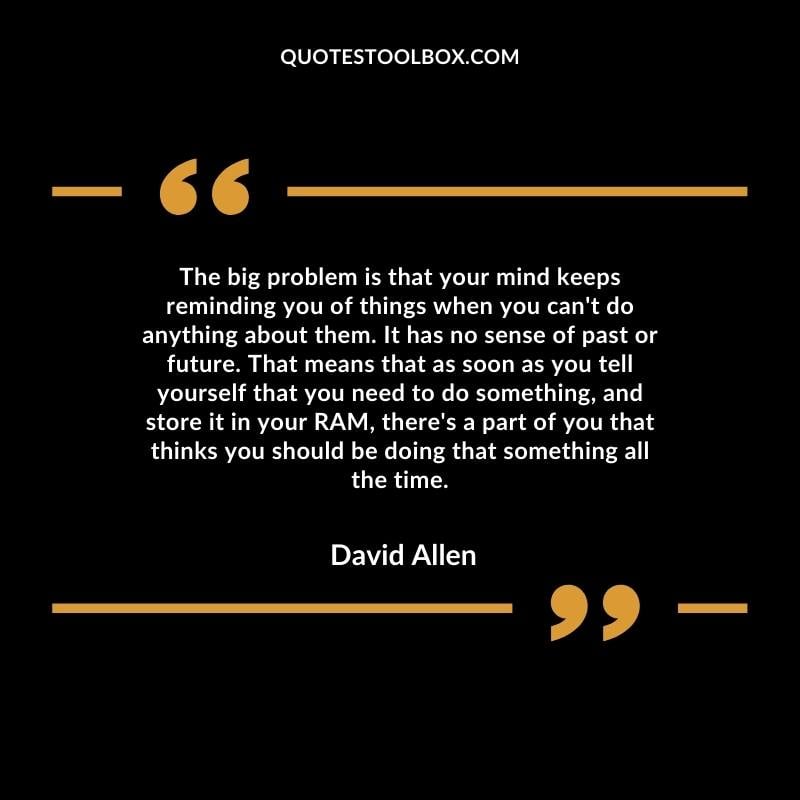 The big problem is that your mind keeps reminding you of things when you can’t do anything about them. It has no sense of past or future. That means that as soon as you tell yourself that you need to do something, and store it in your RAM, there’s a part of you that thinks you should be doing that something all the time.  David Allen 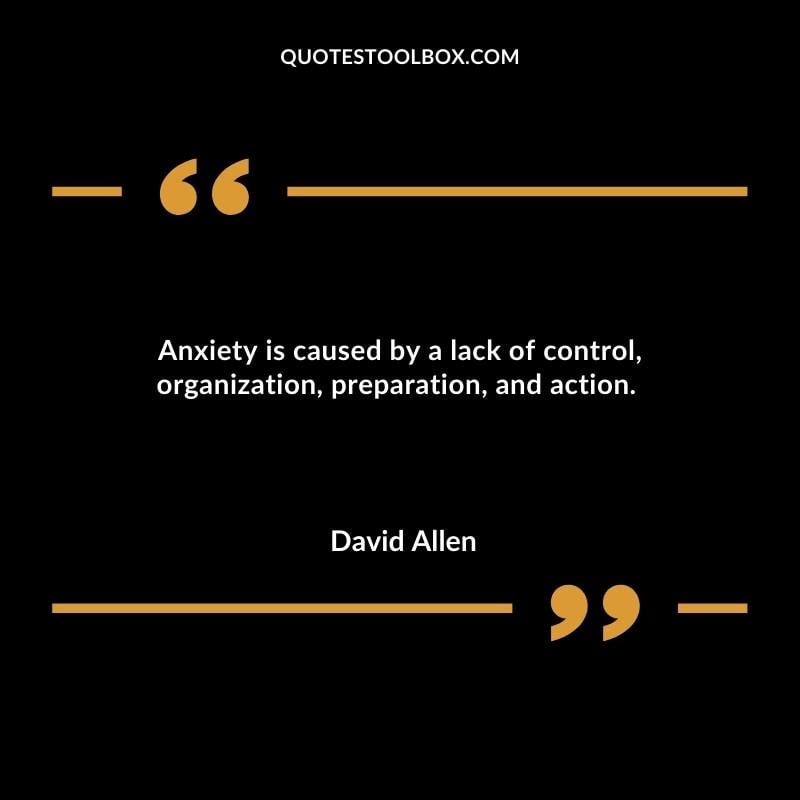 Anxiety is caused by a lack of control, organization, preparation, and action. David Allen 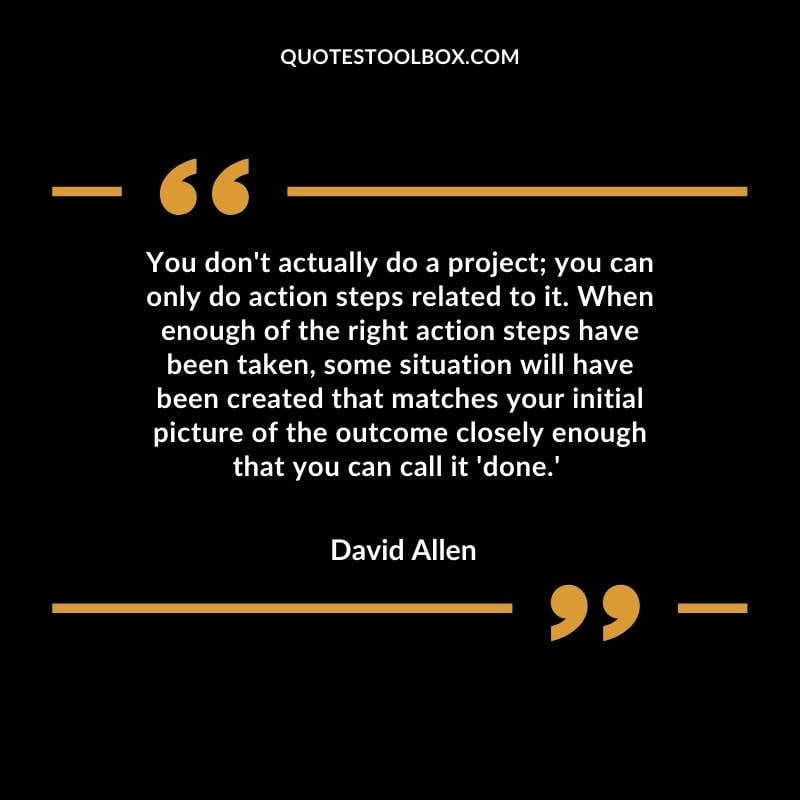 You don’t actually do a project; you can only do action steps related to it. When enough of the right action steps have been taken, some situation will have been created that matches your initial picture of the outcome closely enough that you can call it ‘done.’ David Allen 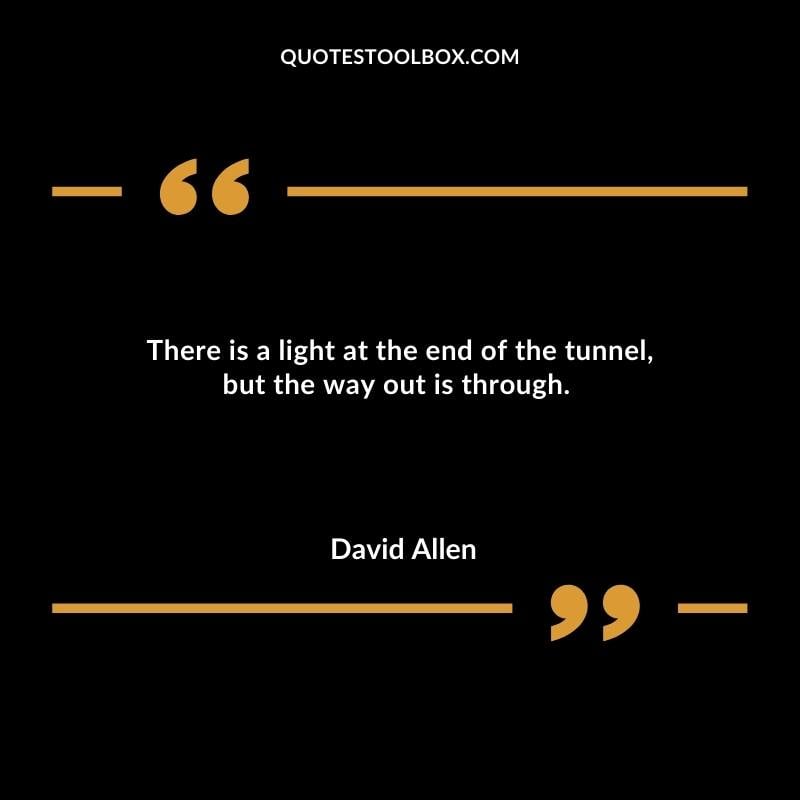 There is a light at the end of the tunnel, but the way out is through. David Allen 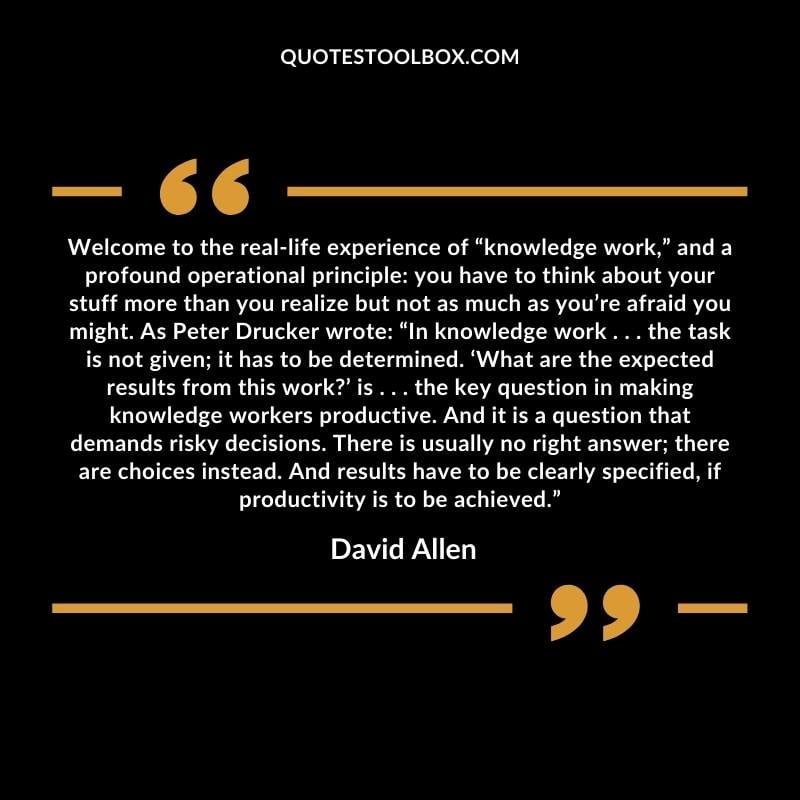 Welcome to the real-life experience of “knowledge work,” and a profound operational principle: you have to think about your stuff more than you realize but not as much as you’re afraid you might. As Peter Drucker wrote: “In knowledge work . . . the task is not given; it has to be determined. ‘What are the expected results from this work?’ is . . . the key question in making knowledge workers productive. And it is a question that demands risky decisions. There is usually no right answer; there are choices instead. And results have to be clearly specified, if productivity is to be achieved.” David Allen 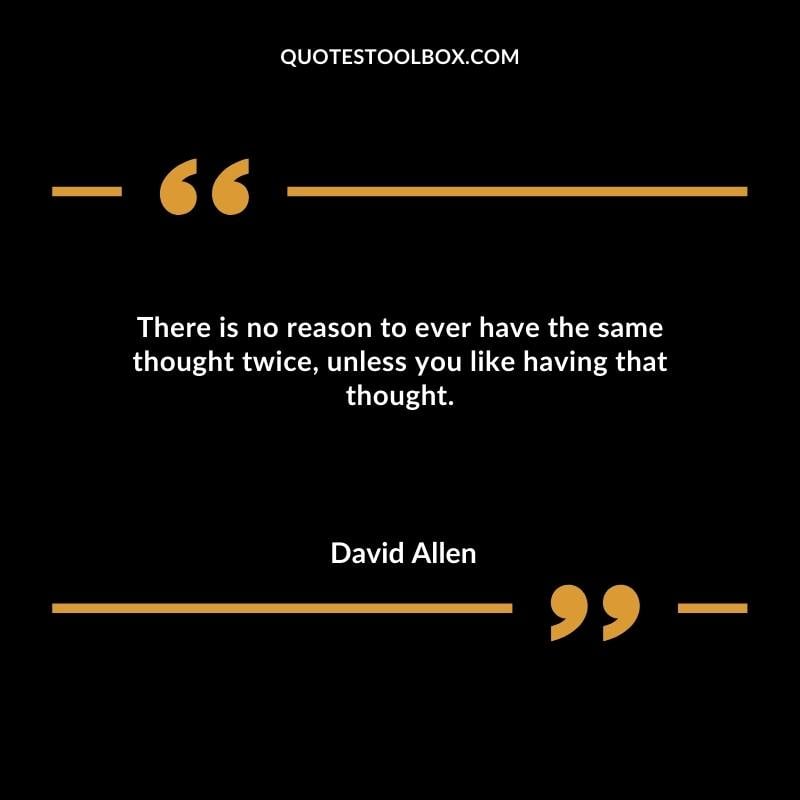 There is no reason to ever have the same thought twice, unless you like having that thought.  David Allen 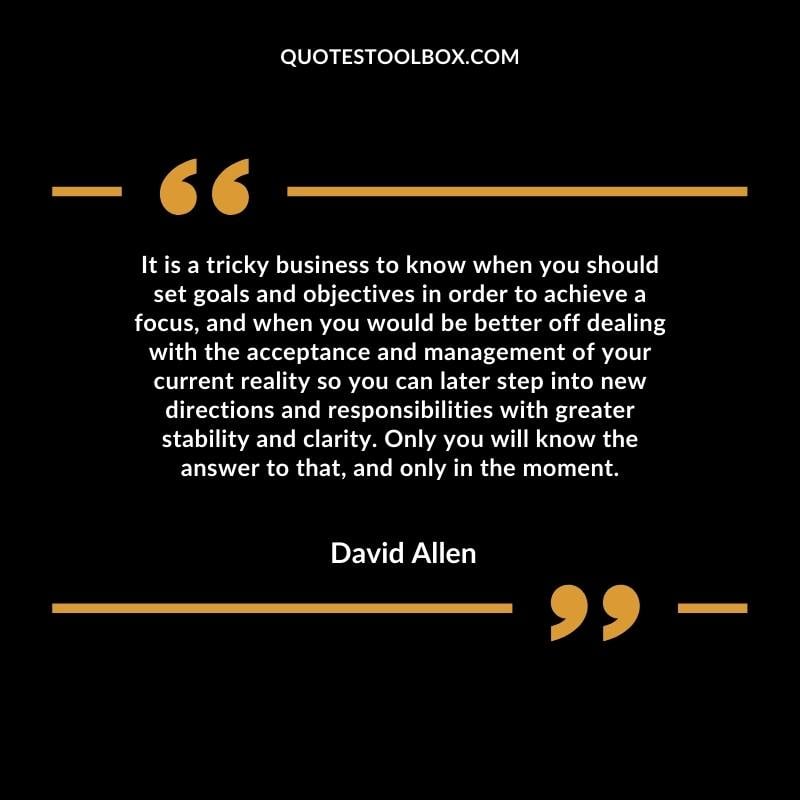 It is a tricky business to know when you should set goals and objectives in order to achieve a focus, and when you would be better off dealing with the acceptance and management of your current reality so you can later step into new directions and responsibilities with greater stability and clarity. Only you will know the answer to that, and only in the moment. David Allen 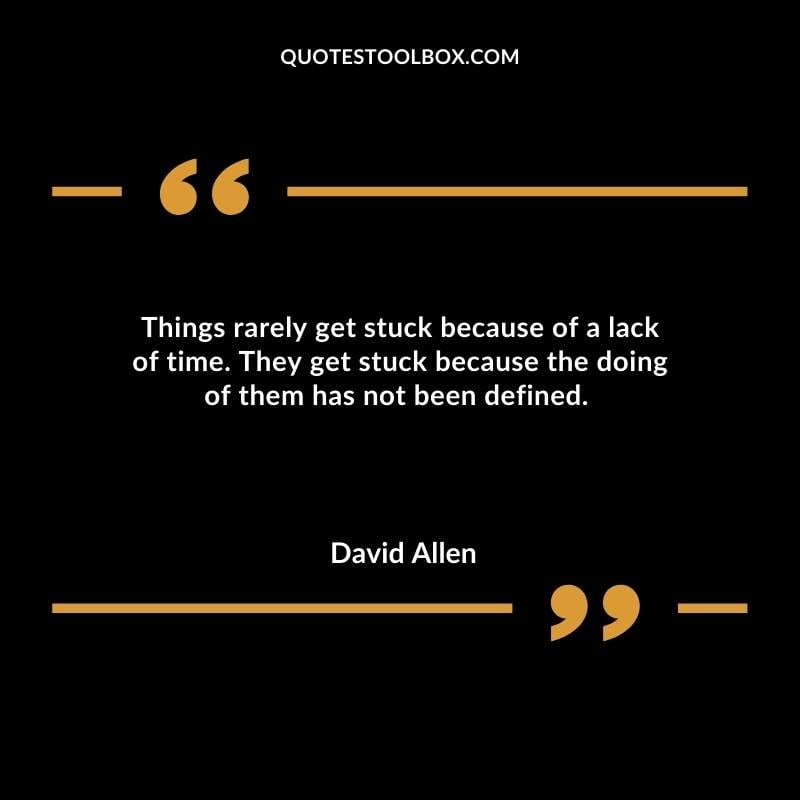 David Allen was born December 28, 1945 in Shreveport, Louisiana.  He is the owner of the David Allen Company which provides productivity and executive coaching and consulting services and products.

His first book Getting Things Done: The Art of Stress-Free Productivity was on the best seller list and has sold over 2 million copies worldwide

He asserts that before the age of 35, he held 35 occupations.  When he won a contract to create a program for Lockheed executives and managers in the 1980s, he started applying his views on efficiency with enterprises.

His productivity methadology known as Getting Things Done.  Allen’s philosophy can be summed up by his belief that: “there is an inverse relationship between things on your mind and those things getting done.”

The most distracting tasks that tend to occupy our mind are those that are not complete.  The best way to deal with it is to define the tasks that needs to be done in one sentence, including what the intended outcome is that will allow you to consider the task to be completed.

The work flow process is broken down into the following steps:

Capture and collect what has your attention.   That is to say get everything that is on your mind  into your collection tools or inboxes.  That could be on paper, on your computer, voice recordings, or physical collection boxes.

Clarify and process what you have collected and what each item means.  Is what you have gathered actionable?  If it is actionable, what is the next step to take? If more than one action is needed, then you need to create a project.If it is not actionable, is it trash? Is it reference material?  Is it something to put on hold for later action?  The results of the processing will end up in one of 8 categories.

Trash, on your someday/maybe list, filed as reference, on your task list or project list (if it will take two or more steps to complete), complete immediately if it will take less than two minutes to do, delegated to another person (which also puts it on the waiting for list. on a context-based next action list if it requires only one step, or on your calendar (if it is time or date sensitive).

Create reminders of your action steps and projects in places where you will review frequently such as calendars and process checklists.  Your system  has to be completely external from your mind and set up so that you trust that it will not miss anything.  If you don’t trust your system completely, you will continue to think about what you need to do which defeats the purpose of the external system.

Doing a weekly review of all projects.

Use your trusted system to make action decisions with confidence and clarity to reduce stress and allow for greater productivity.

Related Posts Recommended for You: