Welcome to our collection of Steve Jobs Quotes! 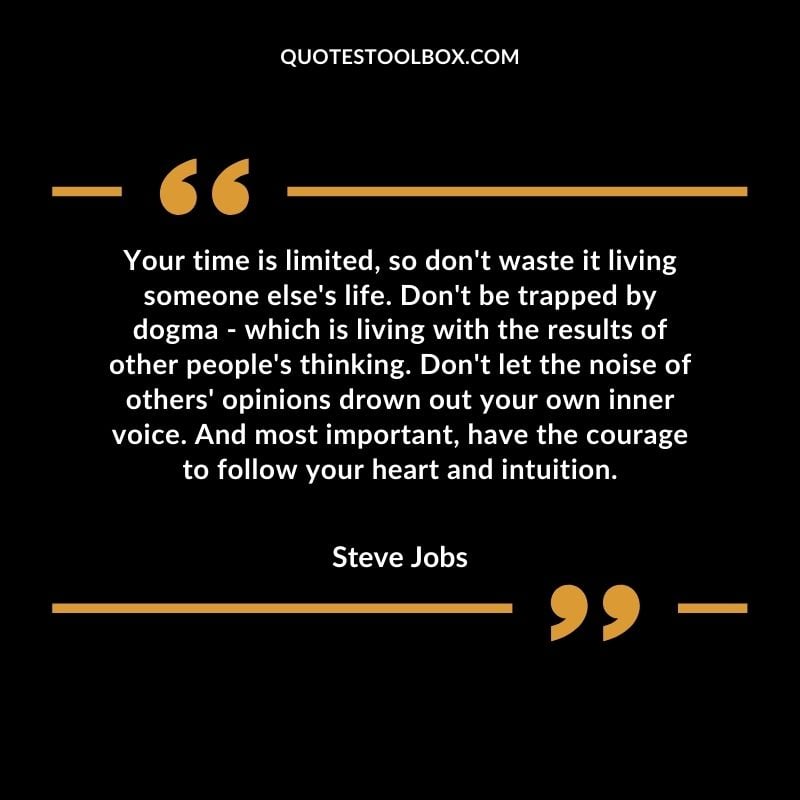 Your time is limited, so don’t waste it living someone else’s life. Don’t be trapped by dogma – which is living with the results of other people’s thinking. Don’t let the noise of others’ opinions drown out your own inner voice. And most important, have the courage to follow your heart and intuition. Steve Jobs 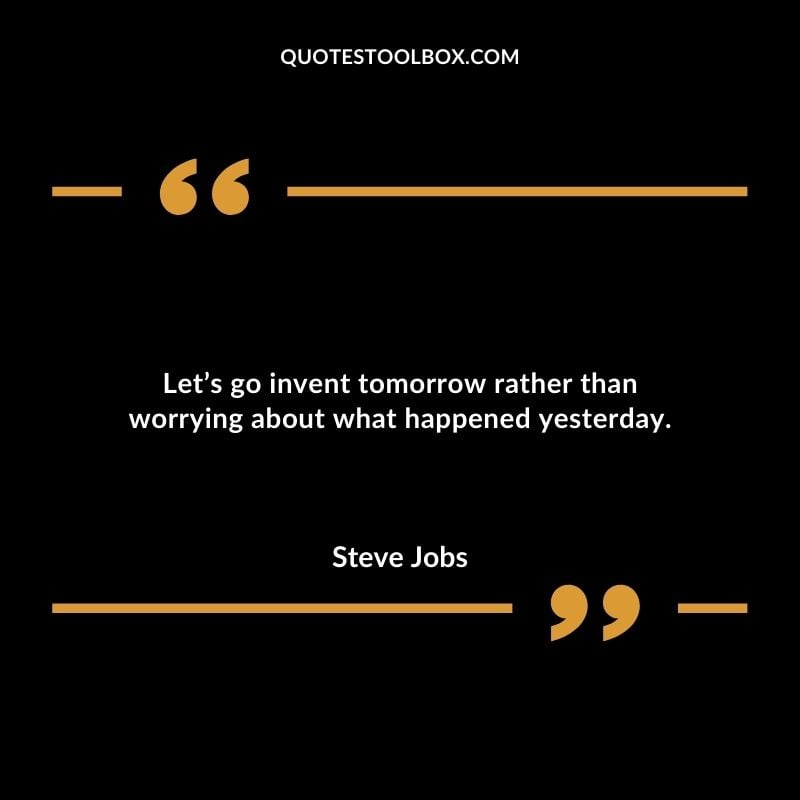 Let’s go invent tomorrow rather than worrying about what happened yesterday. Steve Jobs 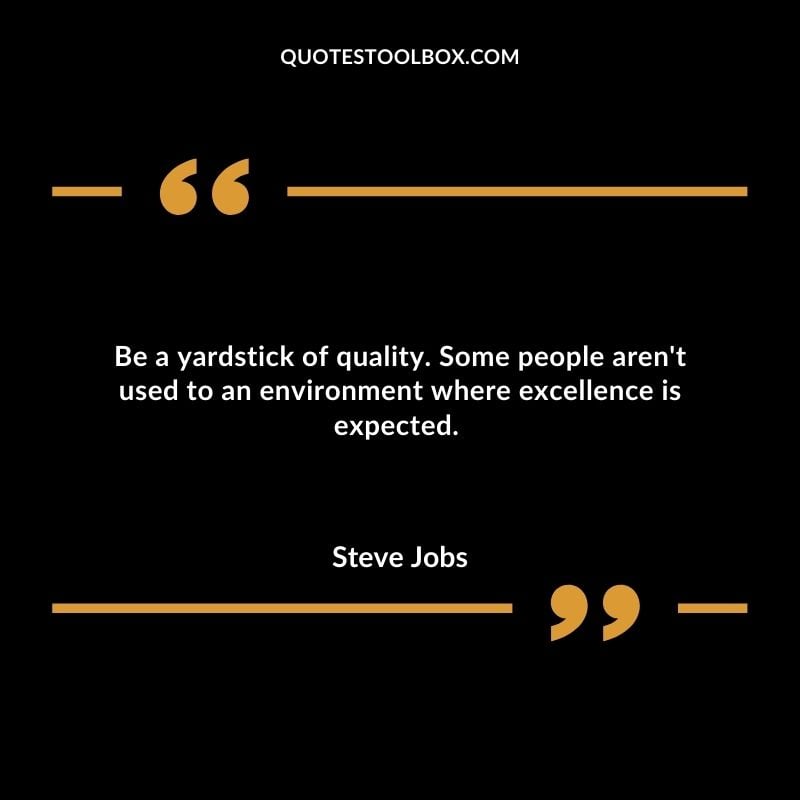 Be a yardstick of quality. Some people aren’t used to an environment where excellence is expected. Steve Jobs 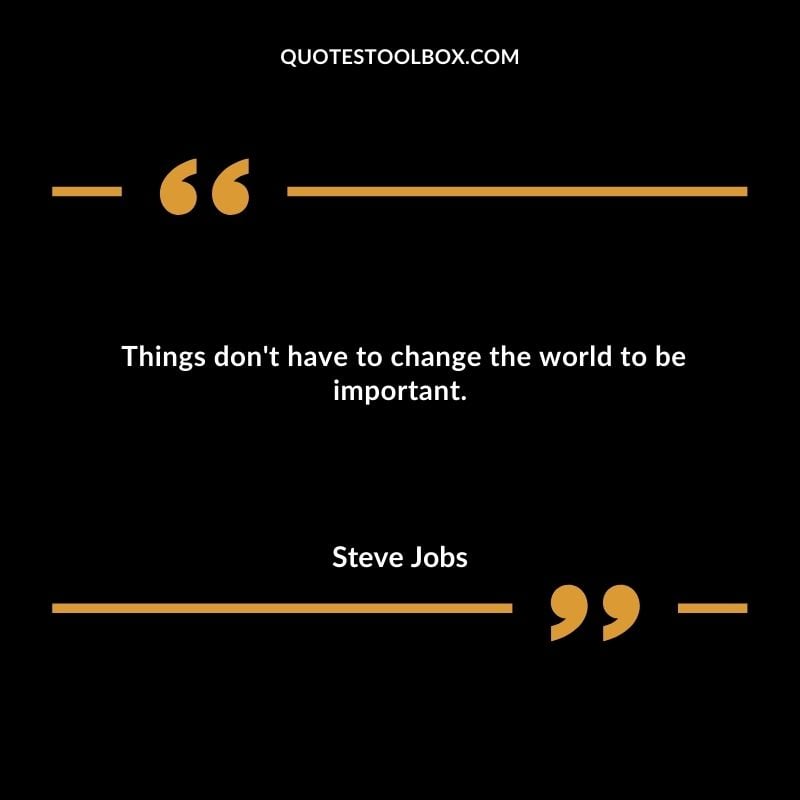 Things don’t have to change the world to be important. Steve Jobs 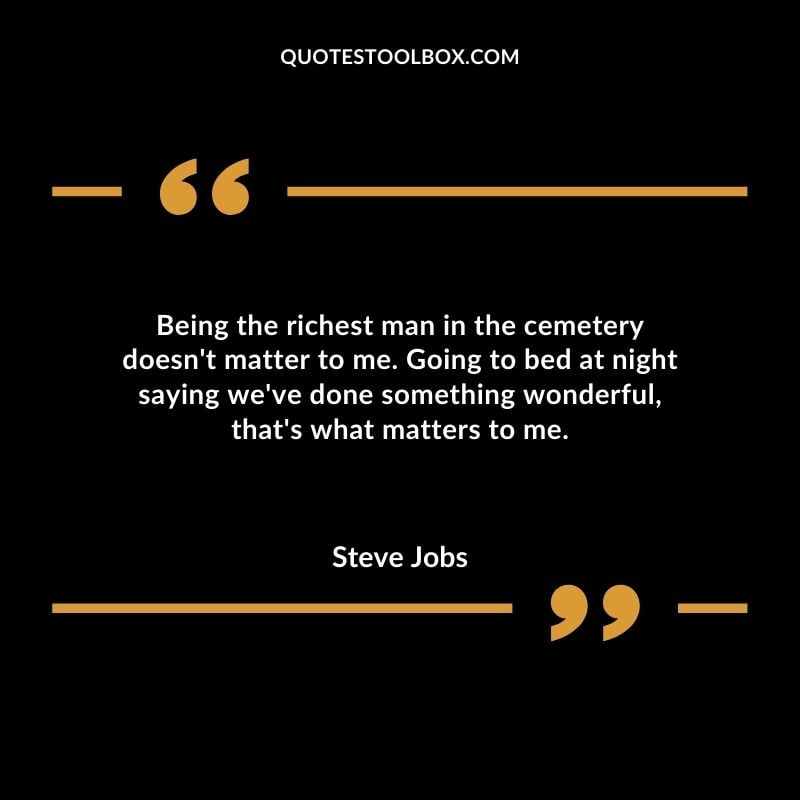 Being the richest man in the cemetery doesn’t matter to me. Going to bed at night saying we’ve done something wonderful, that’s what matters to me. Steve Jobs 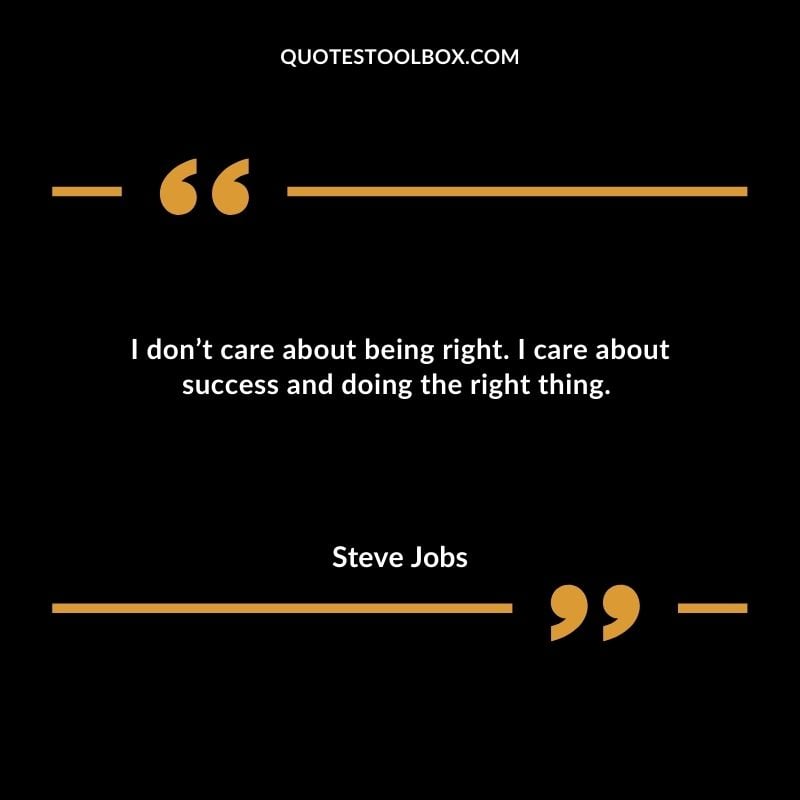 I don’t care about being right. I care about success and doing the right thing. Steve Jobs 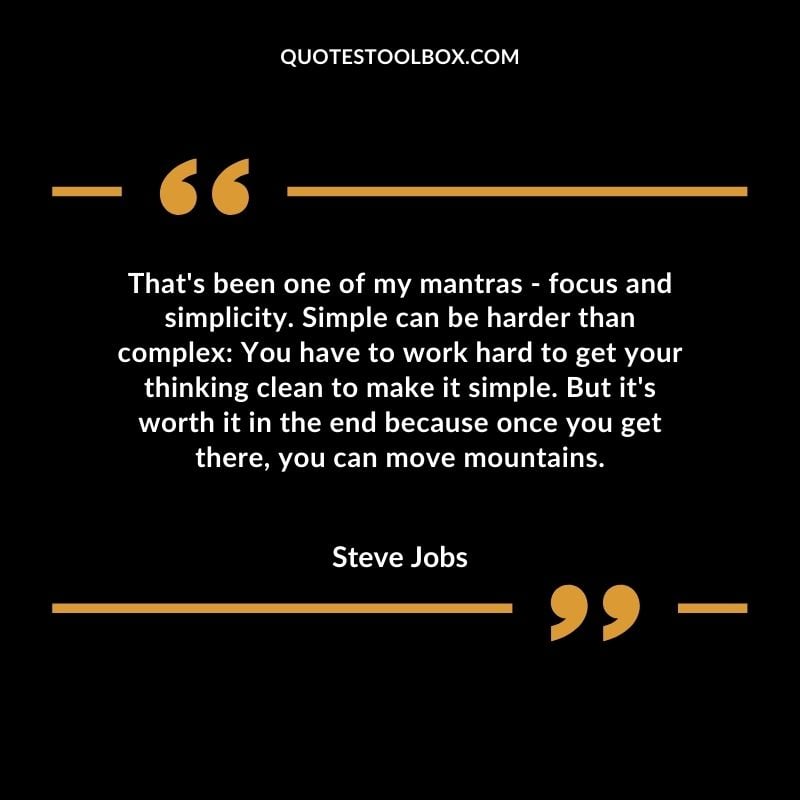 That’s been one of my mantras – focus and simplicity. Simple can be harder than complex: You have to work hard to get your thinking clean to make it simple. But it’s worth it in the end because once you get there, you can move mountains. Steve Jobs 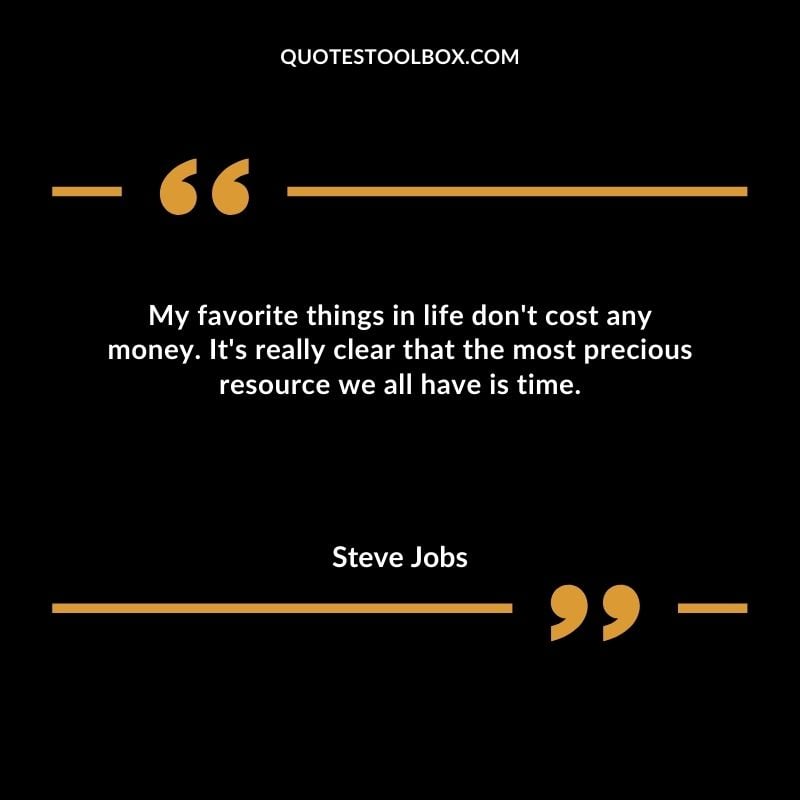 My favorite things in life don’t cost any money. It’s really clear that the most precious resource we all have is time. Steve Jobs Quotes 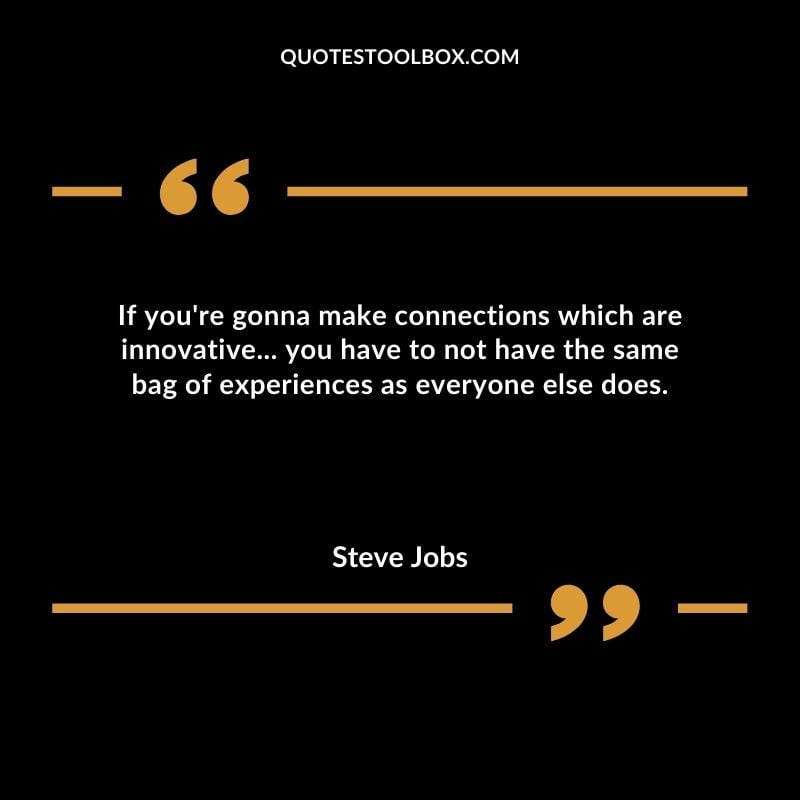 If you’re gonna make connections which are innovative… you have to not have the same bag of experiences as everyone else does. Steve Jobs 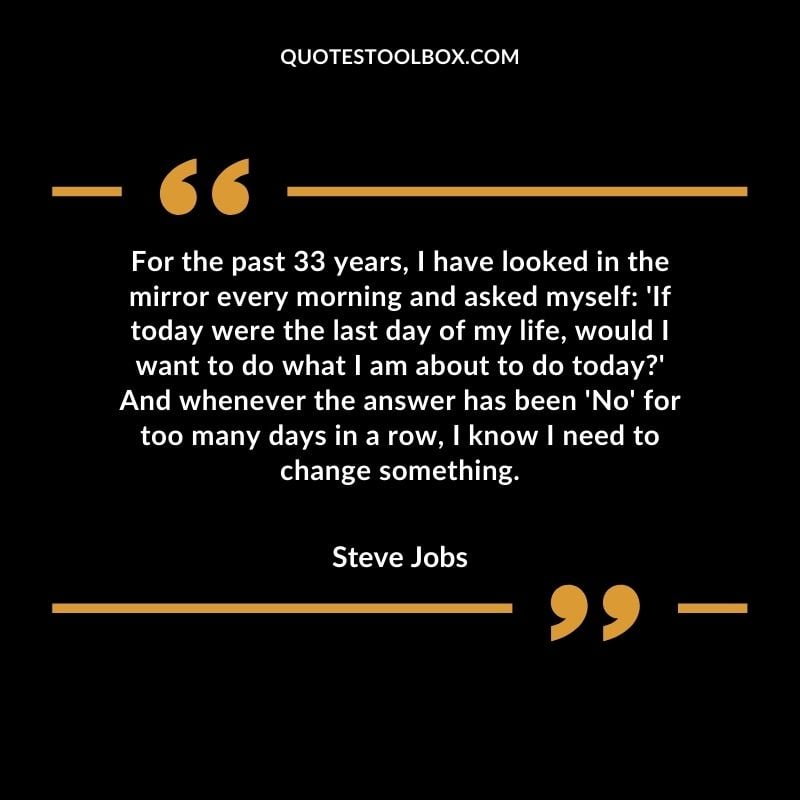 For the past 33 years, I have looked in the mirror every morning and asked myself: ‘If today were the last day of my life, would I want to do what I am about to do today?’ And whenever the answer has been ‘No’ for too many days in a row, I know I need to change something. Steve Jobs 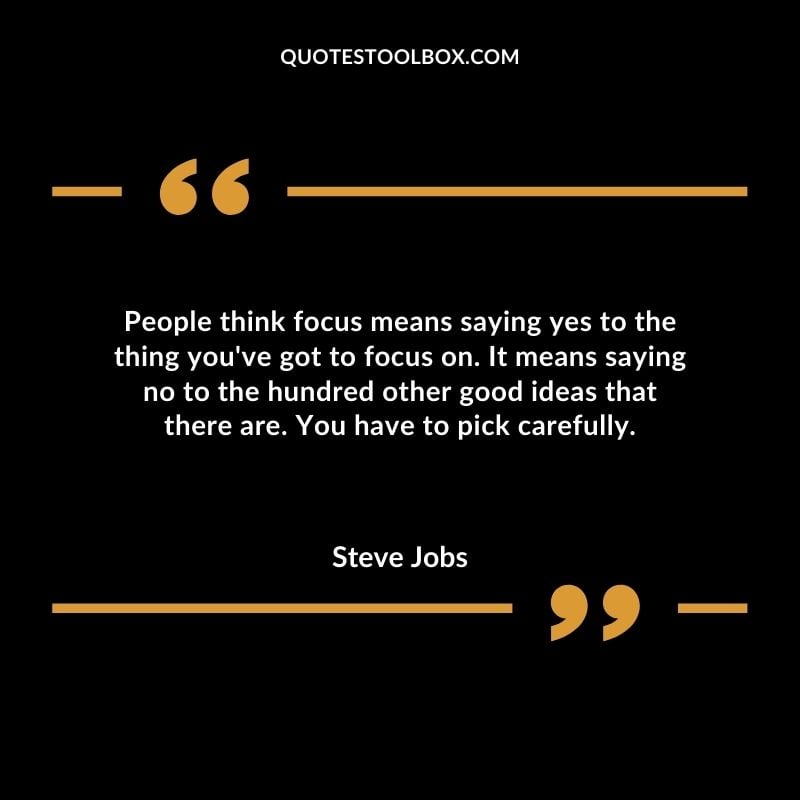 People think focus means saying yes to the thing you’ve got to focus on. It means saying no to the hundred other good ideas that there are. You have to pick carefully. Steve Jobs Quotes 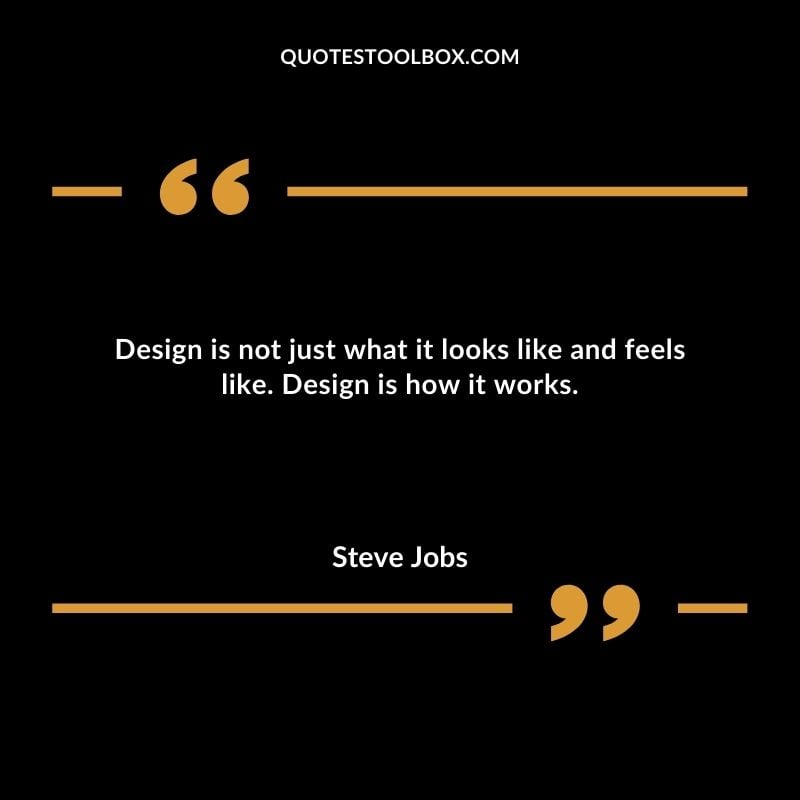 Design is not just what it looks like and feels like. Design is how it works. Steve Jobs 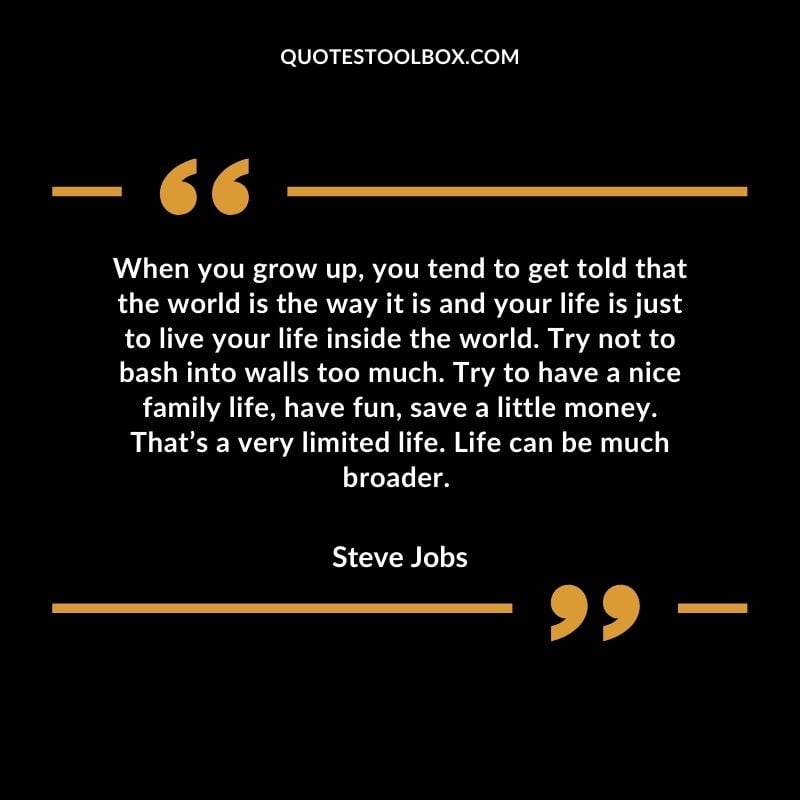 When you grow up, you tend to get told that the world is the way it is and your life is just to live your life inside the world. Try not to bash into walls too much. Try to have a nice family life, have fun, save a little money. That’s a very limited life. Life can be much broader.  Steve Jobs 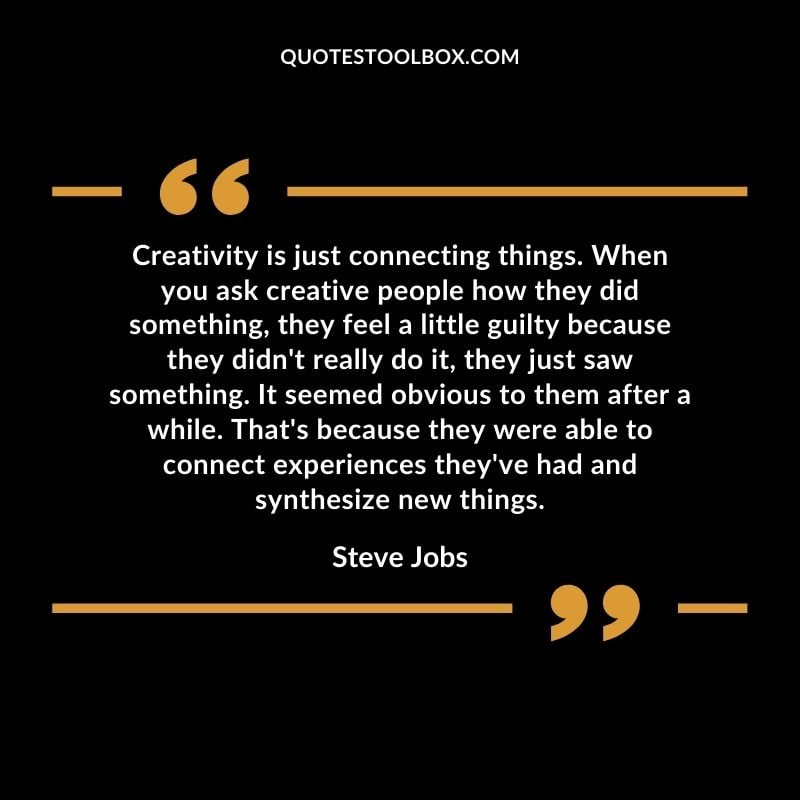 Creativity is just connecting things. When you ask creative people how they did something, they feel a little guilty because they didn’t really do it, they just saw something. It seemed obvious to them after a while. That’s because they were able to connect experiences they’ve had and synthesize new things. Steve Jobs 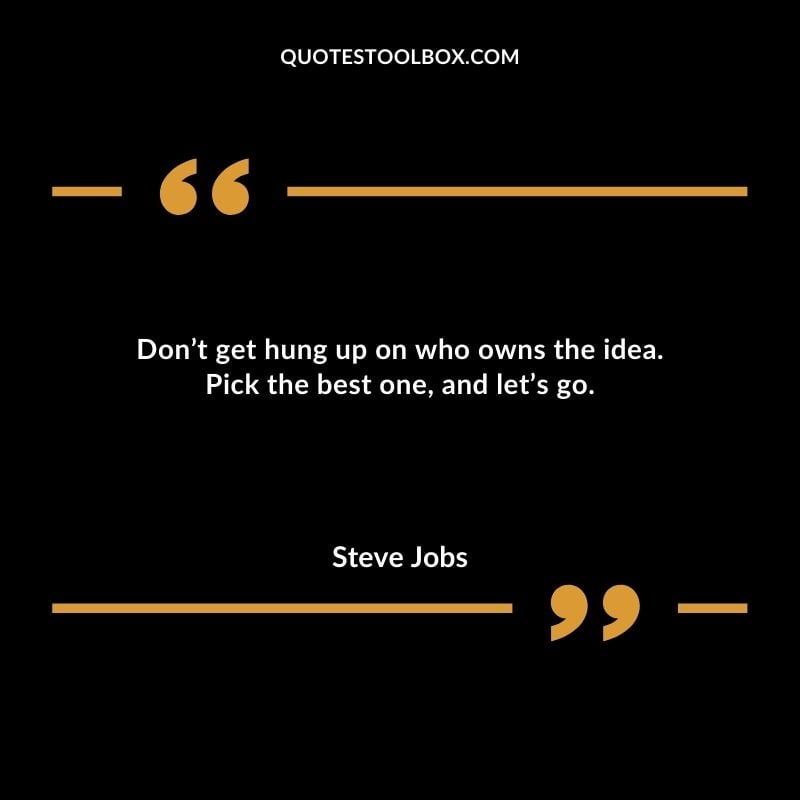 Don’t get hung up on who owns the idea. Pick the best one, and let’s go.  Steve Jobs 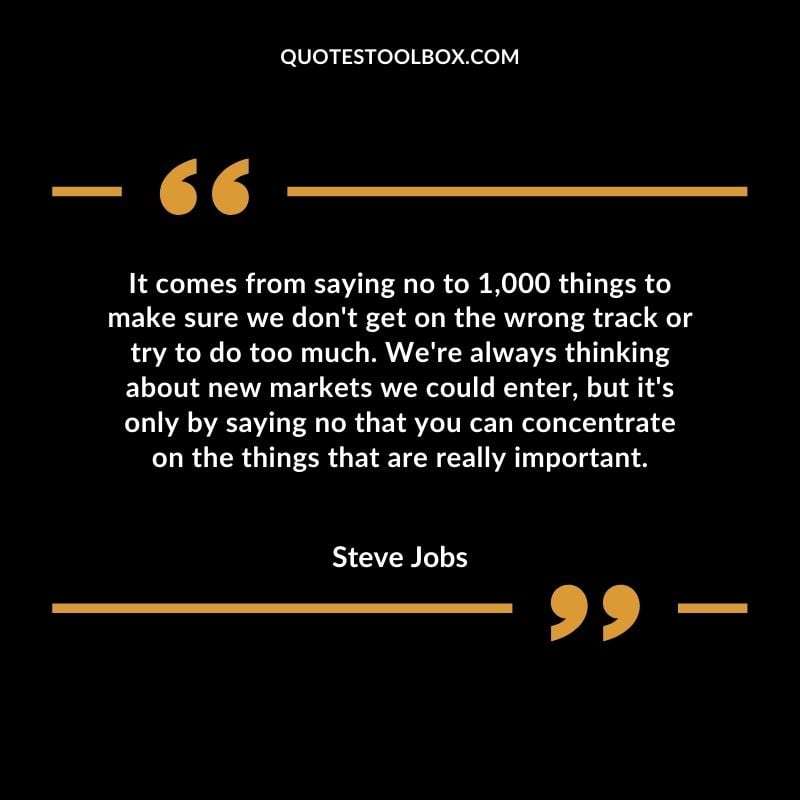 It comes from saying no to 1,000 things to make sure we don’t get on the wrong track or try to do too much. We’re always thinking about new markets we could enter, but it’s only by saying no that you can concentrate on the things that are really important. Steve Jobs 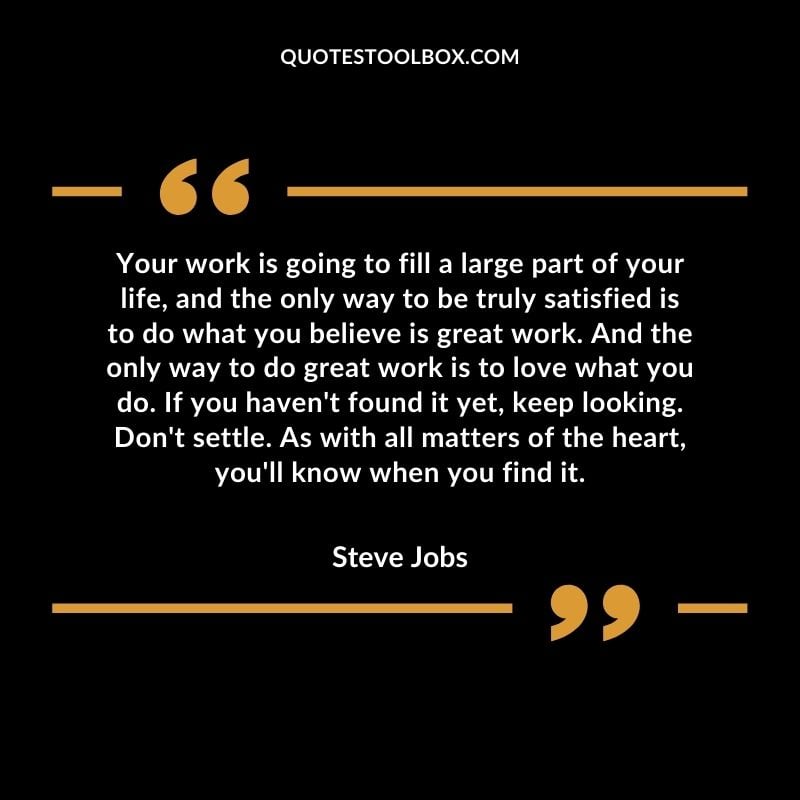 Your work is going to fill a large part of your life, and the only way to be truly satisfied is to do what you believe is great work. And the only way to do great work is to love what you do. If you haven’t found it yet, keep looking. Don’t settle. As with all matters of the heart, you’ll know when you find it. Steve Jobs 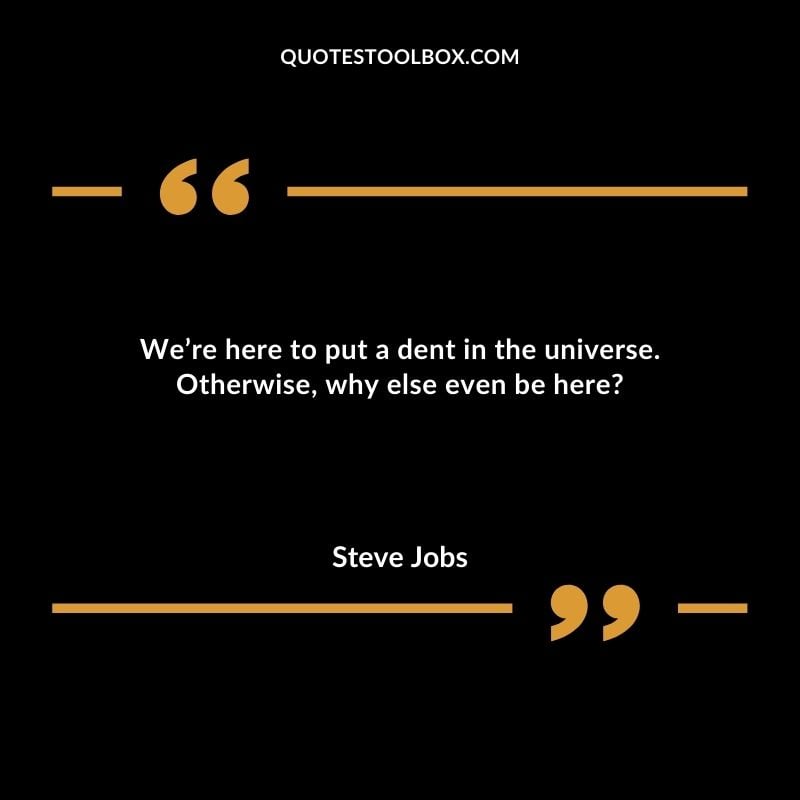 We’re here to put a dent in the universe. Otherwise, why else even be here? Steve Jobs 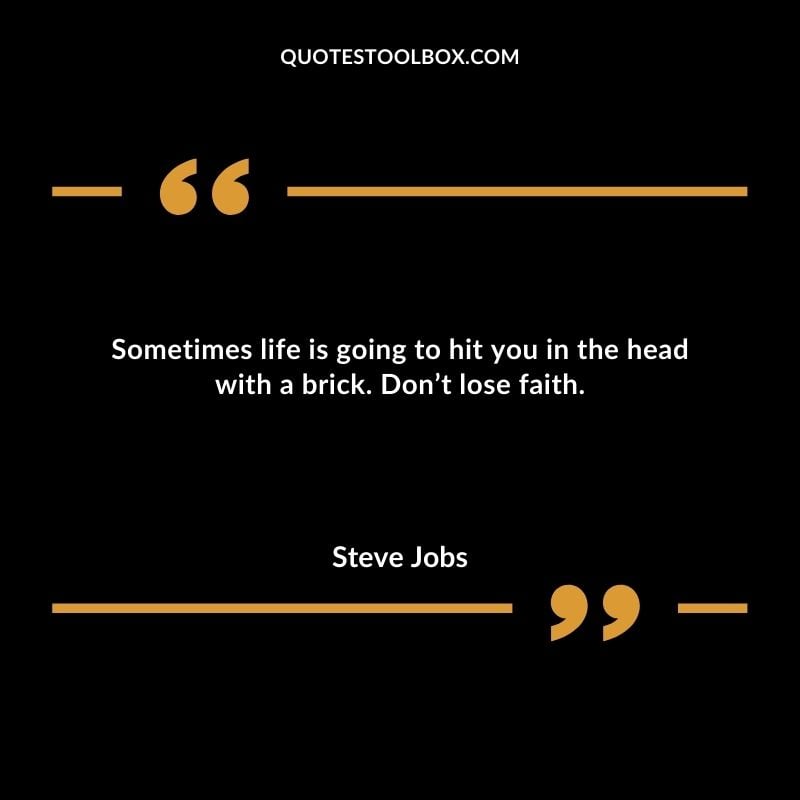 Sometimes life is going to hit you in the head with a brick. Don’t lose faith. Steve Jobs 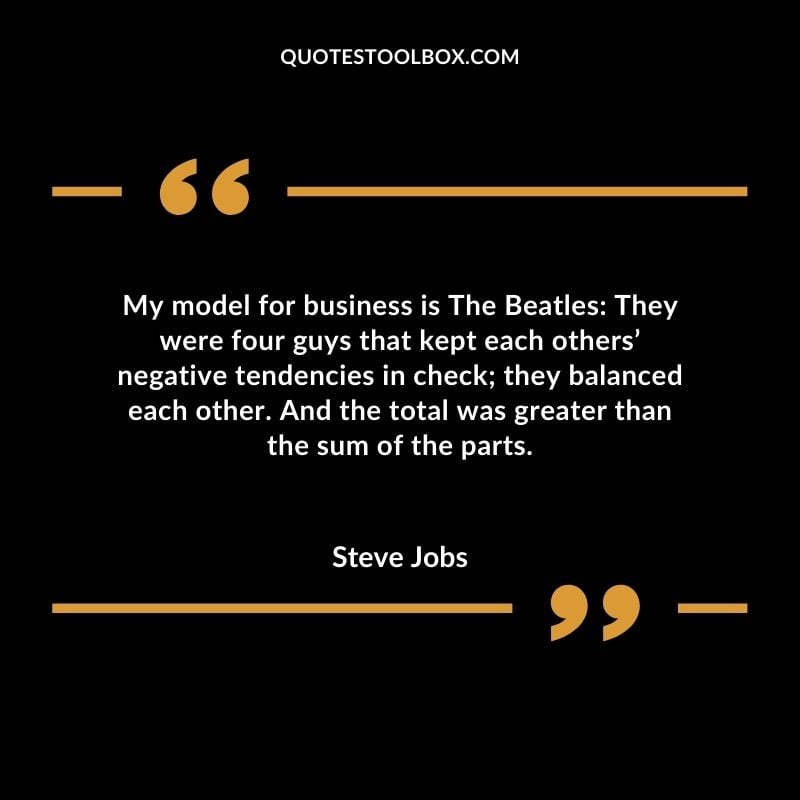 My model for business is The Beatles: They were four guys that kept each others’ negative tendencies in check; they balanced each other. And the total was greater than the sum of the parts. Steve Jobs 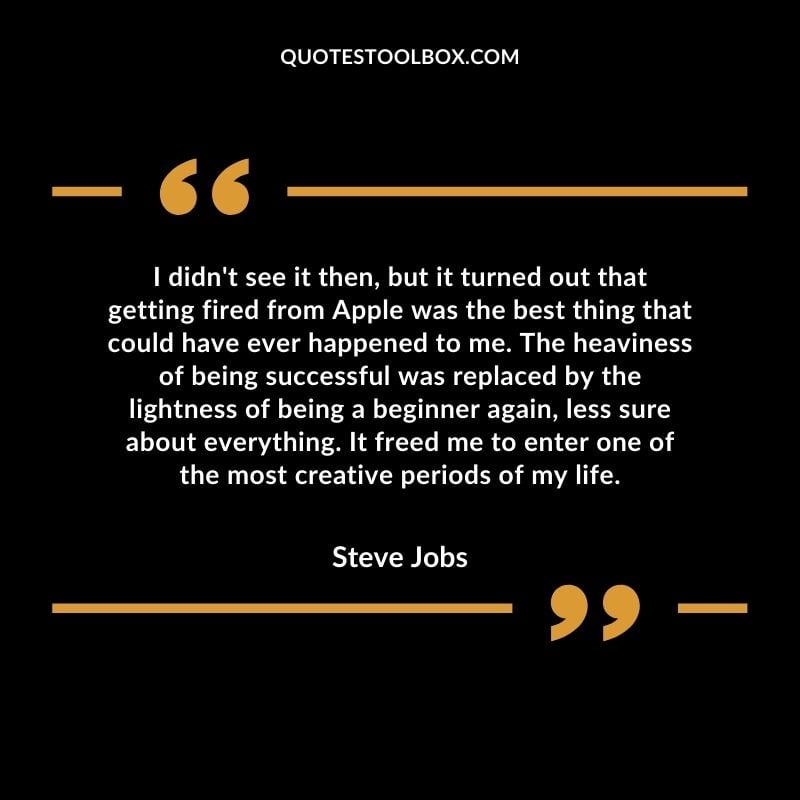 I didn’t see it then, but it turned out that getting fired from Apple was the best thing that could have ever happened to me. The heaviness of being successful was replaced by the lightness of being a beginner again, less sure about everything. It freed me to enter one of the most creative periods of my life. Steve Jobs 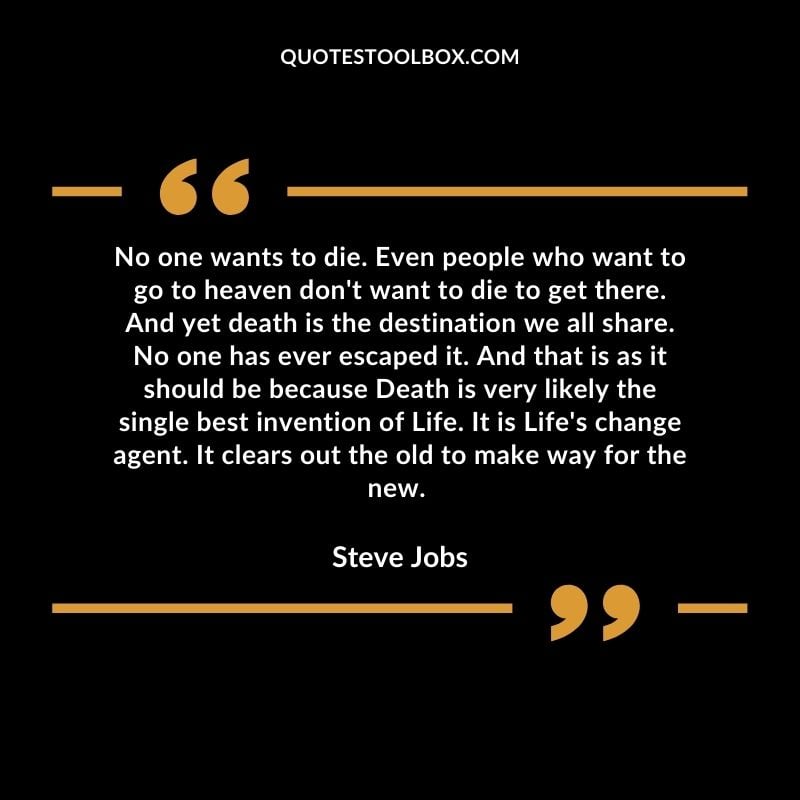 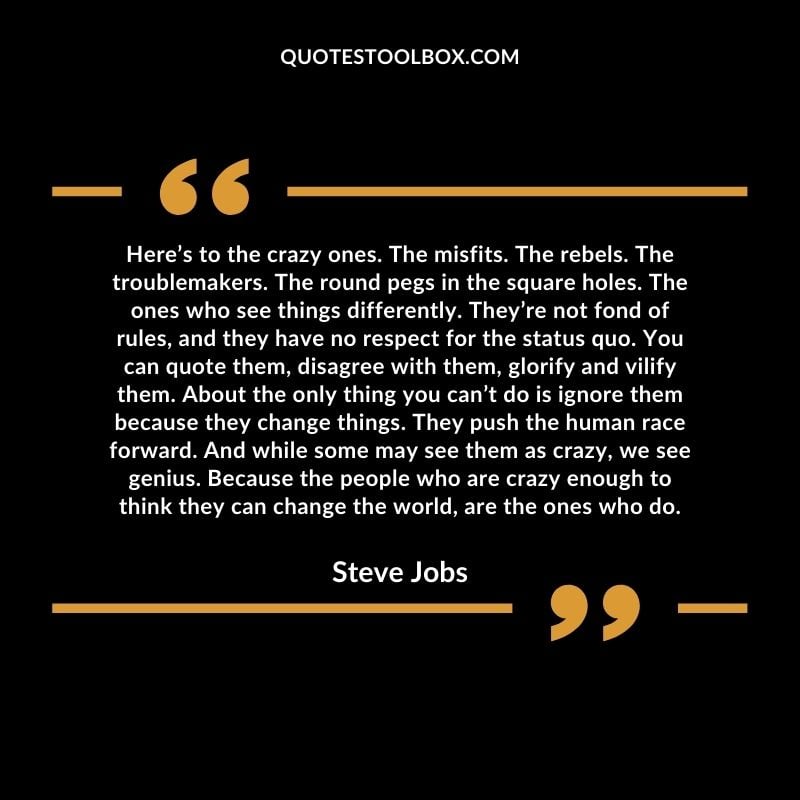 Here’s to the crazy ones. The misfits. The rebels. The troublemakers. The round pegs in the square holes. The ones who see things differently. They’re not fond of rules, and they have no respect for the status quo. You can quote them, disagree with them, glorify and vilify them. About the only thing you can’t do is ignore them because they change things. They push the human race forward. And while some may see them as crazy, we see genius. Because the people who are crazy enough to think they can change the world, are the ones who do.  Steve Jobs 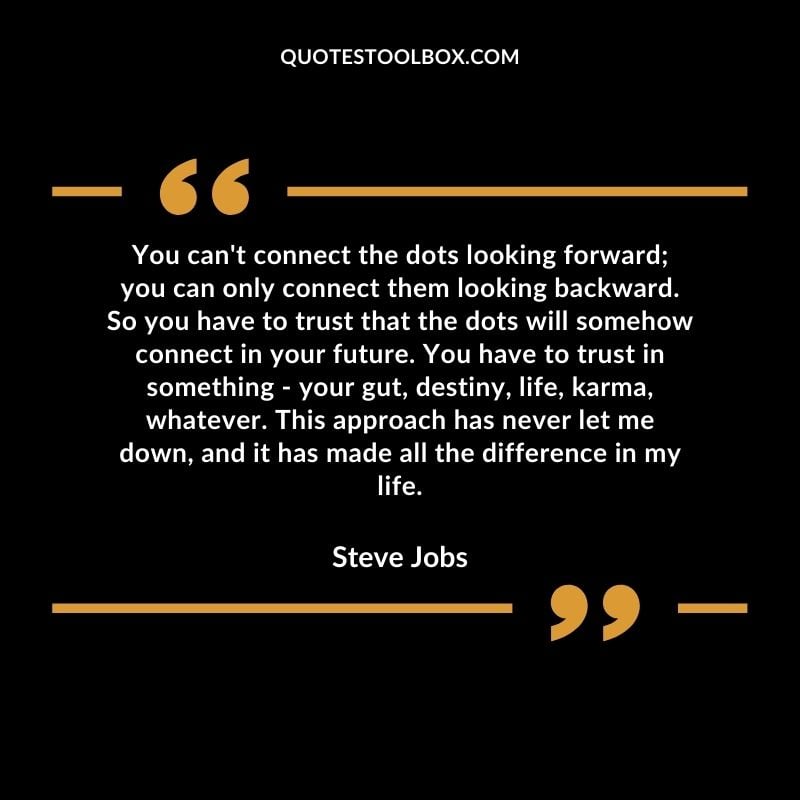 You can’t connect the dots looking forward; you can only connect them looking backward. So you have to trust that the dots will somehow connect in your future. You have to trust in something – your gut, destiny, life, karma, whatever. This approach has never let me down, and it has made all the difference in my life. Steve Jobs

Innovation distinguishes between a leader and a follower. Steve Jobs Quotes 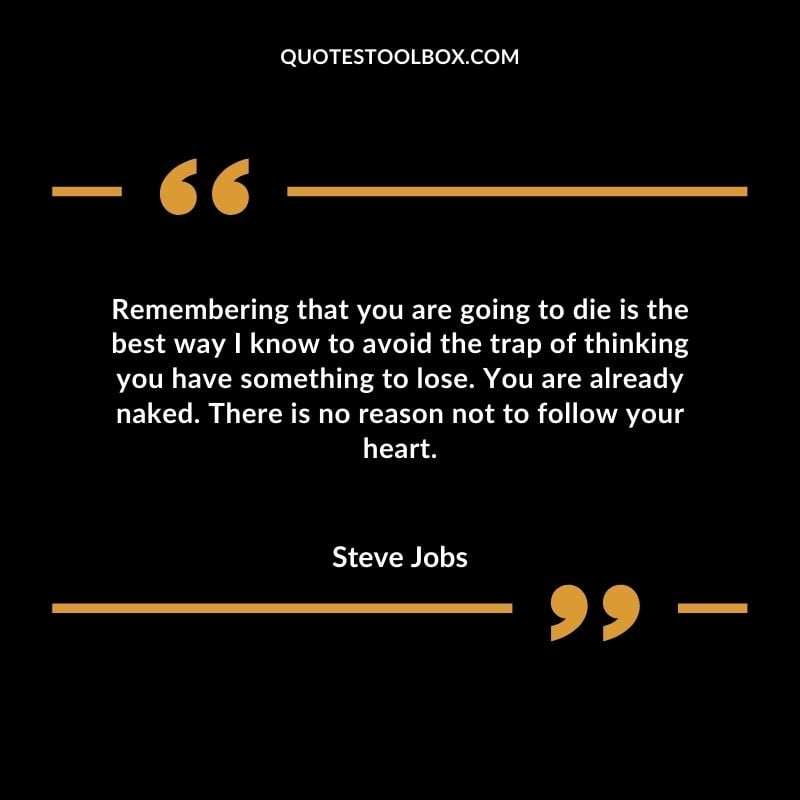 Remembering that you are going to die is the best way I know to avoid the trap of thinking you have something to lose. You are already naked. There is no reason not to follow your heart. Steve Jobs 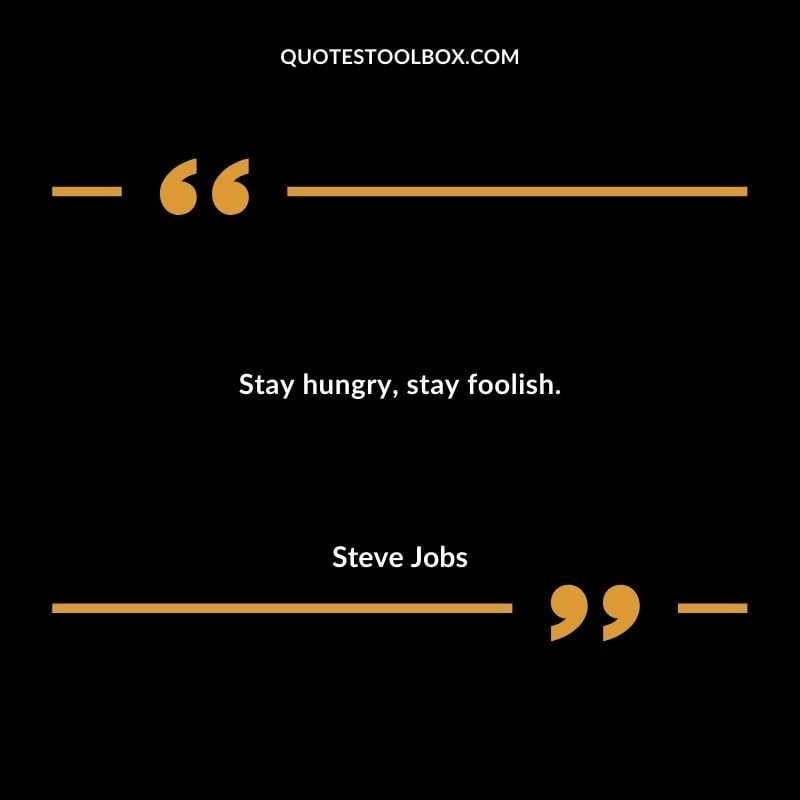 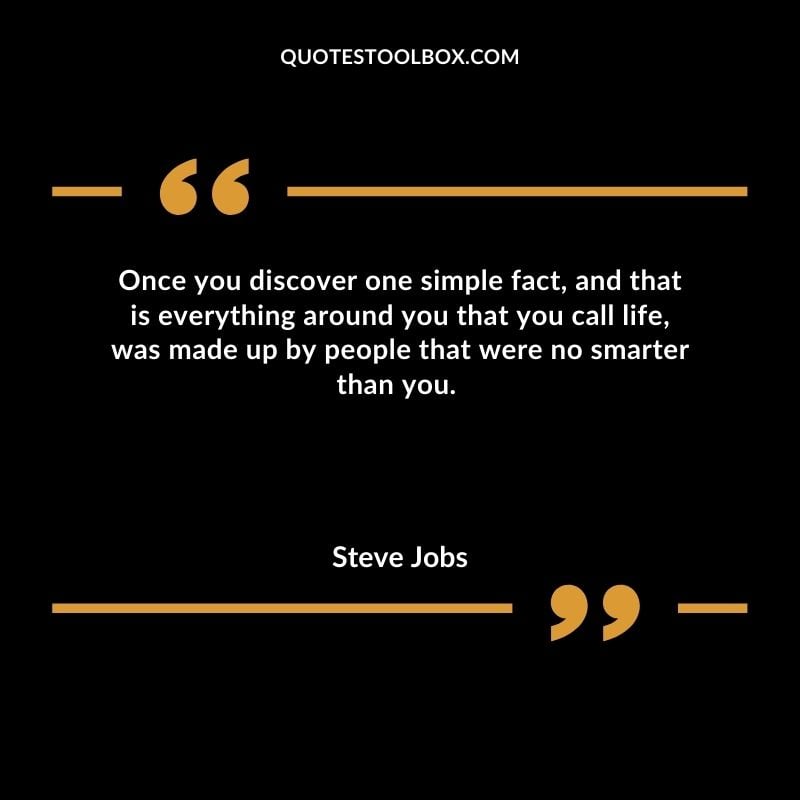 Once you discover one simple fact, and that is everything around you that you call life, was made up by people that were no smarter than you.  Steve Jobs 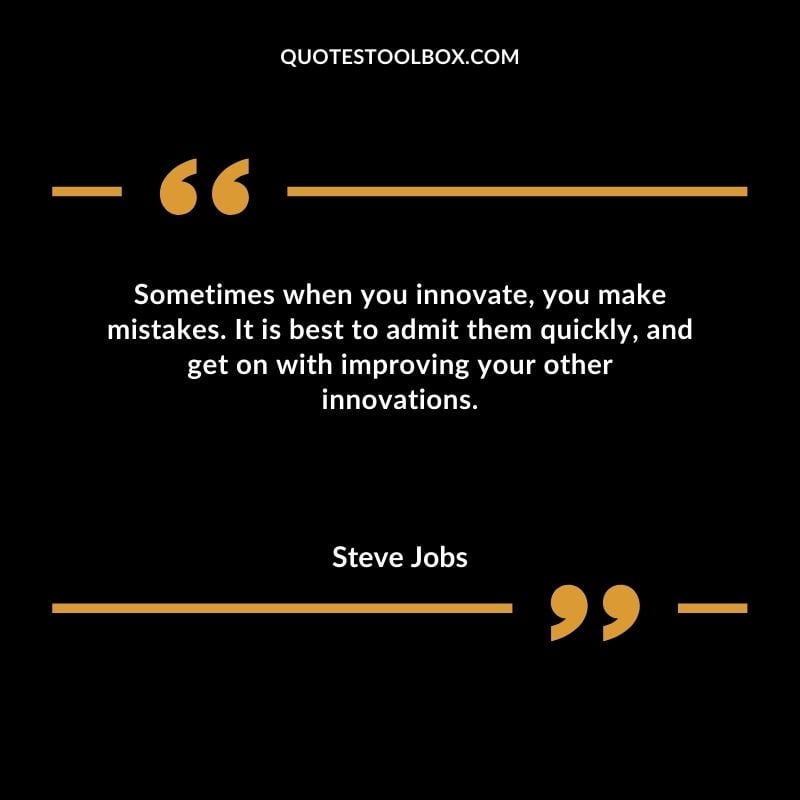 Sometimes when you innovate, you make mistakes. It is best to admit them quickly, and get on with improving your other innovations. Steve Jobs 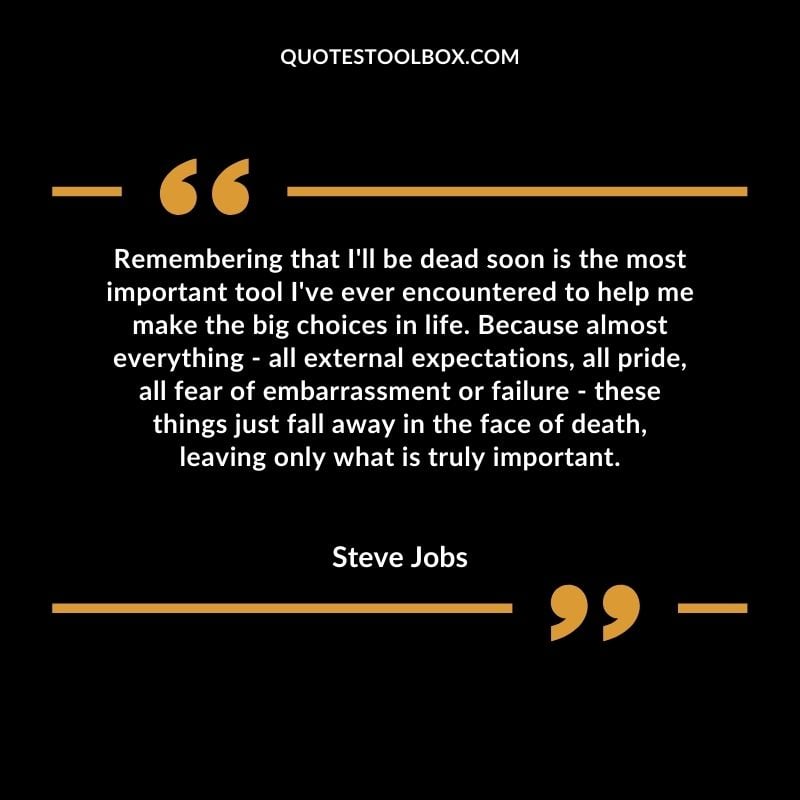 Remembering that I’ll be dead soon is the most important tool I’ve ever encountered to help me make the big choices in life. Because almost everything – all external expectations, all pride, all fear of embarrassment or failure – these things just fall away in the face of death, leaving only what is truly important. Steve Jobs

Born on 24 February 1955 in Palo Alto, California, U.S., Steven Paul Jobs was an American entrepreneur and industry innovator who founded Apple in 1976 with Steve Wozniak.  Both  men are recognized as the pioneers of the personal computer era of the 1970s and 1980s. Apple is a company that revolutionized technologies, including the iPhone and iPad. Steve Jobs was a charismatic pioneer of the personal computer era.

“Jobs was one of the first entrepreneurs to understand that the personal computer would appeal to a broad audience, at least if it did not appear to belong in a junior high school science fair. With Jobs’s encouragement, Wozniak designed an improved model, the Apple II, complete with a keyboard, and they arranged to have a sleek, molded plastic case manufactured to enclose the unit.” (source)

Jobs was also the chairman of Pixar, founder of NeXT, and a member of The Walt Disney Company‘s board of directors.

To stay releveant and always on the front end of techn, Jobs began reinventing Apple In 2001 . He put Apple in the 21st century. That was the year that Apple introduced iTunes, a computer program for playing music and converting it to a MP3 in a digital format. By 2003 Apple behan selling its own portable mp3 player that could play downloadable songs that could be purchased on the internet.

During this time Jobs had been diagnosed with with a rare form of pancreatic cancer.

Apple took its first step into Telecommunication by introducing the iPhone on January 9, 2007 to be released on June 29, 2007. During that year’s Macworld keynote, Jobs teased that Apple was about “to reinvent the phone” with the iPhone’s  release. 15 years later, it’s clear Apple did just that

Unfortunately throughout all of the success and progress Apple was seeing, in 2008 he lost a significant amount weight indicating the cancer had returned.

August 24, 2011, he announced his resignation, “I have always said if there ever came a day when I could no longer meet my duties and expectations as Apple’s CEO, I would be the first to let you know. Unfortunately, that day has come.”[202] Jobs named Tim Cook as CEO. He continued to work for Apple until the day before his death just six weeks later, a day after the release of the iPhone 4S.

Related Posts Recommended for You:

One thought on “31 Steve Jobs Quotes (His Life and Death)”