Our 17 Most Influential Leadership Quotes 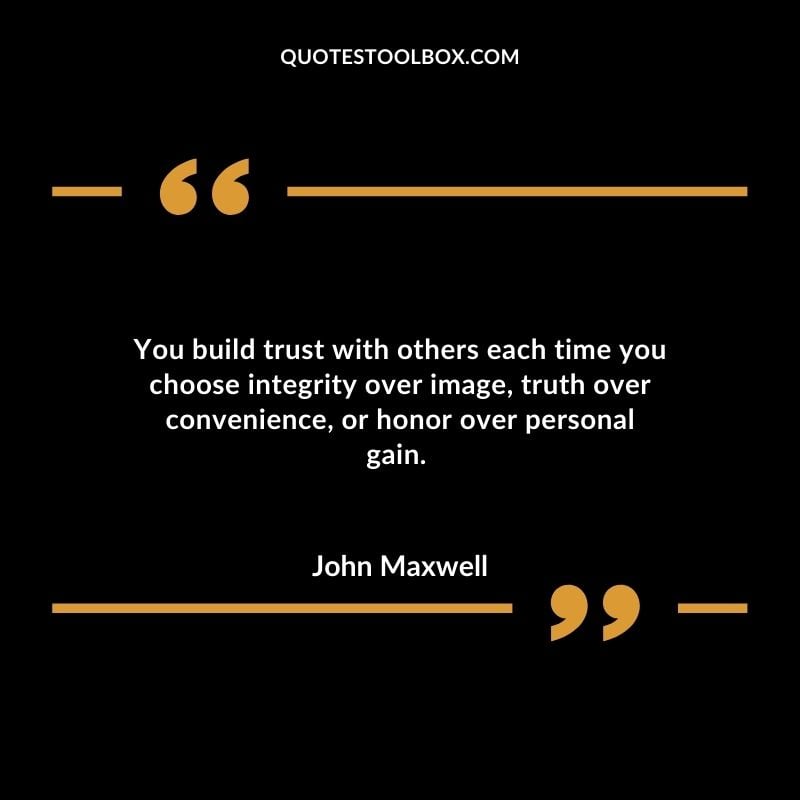 You build trust with others each time you choose integrity over image, truth over convenience, or honor over personal gain. John Maxwell 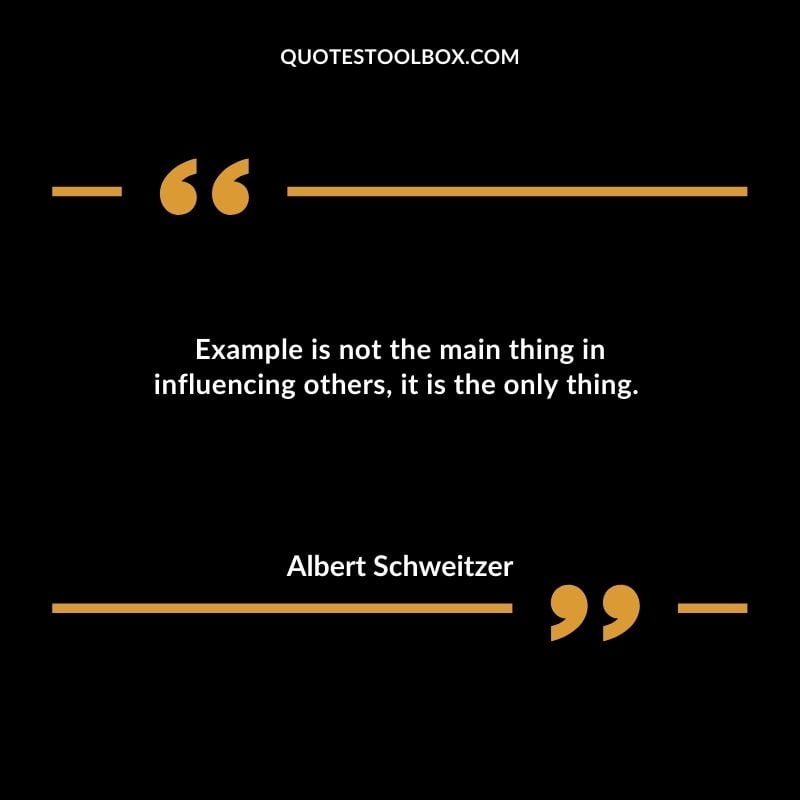 Example is not the main thing in influencing others, it is the only thing. Albert Schweitzer 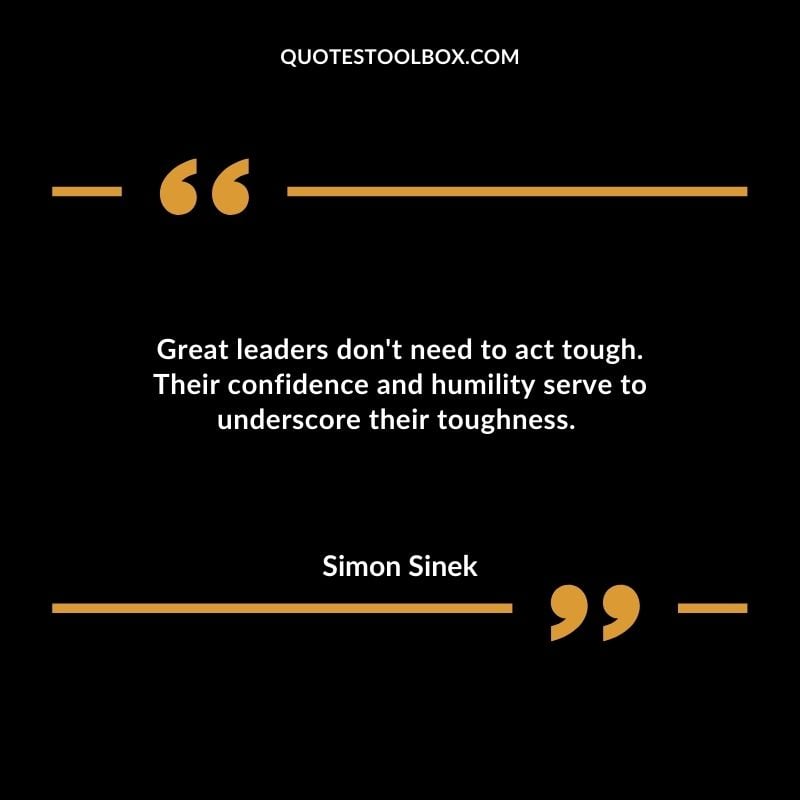 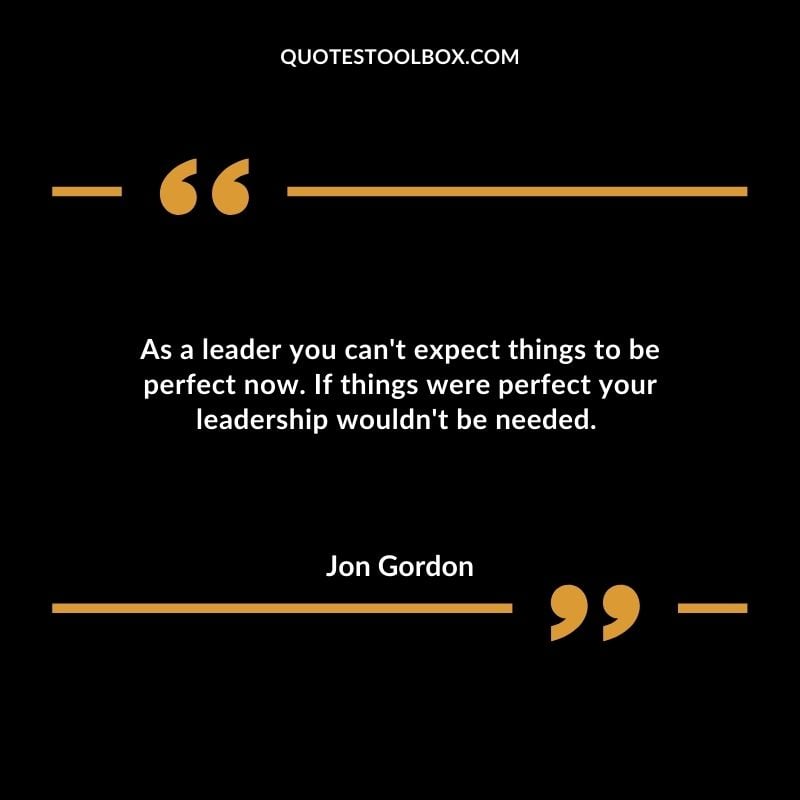 As a leader you can’t expect things to be perfect now. If things were perfect your leadership wouldn’t be needed. Jon Gordon 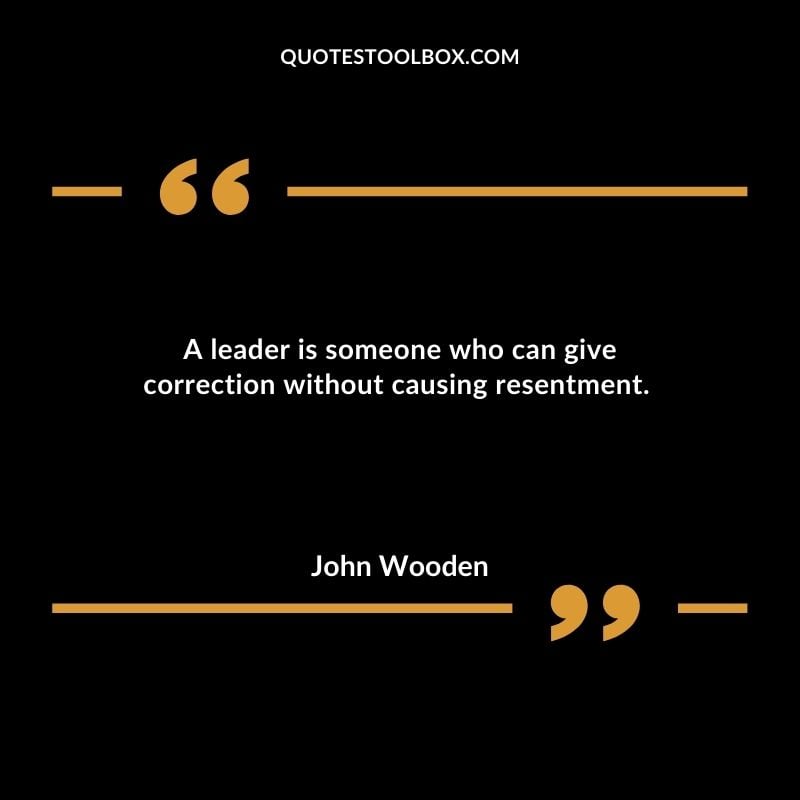 A leader is someone who can give correction without causing resentment. John Wooden 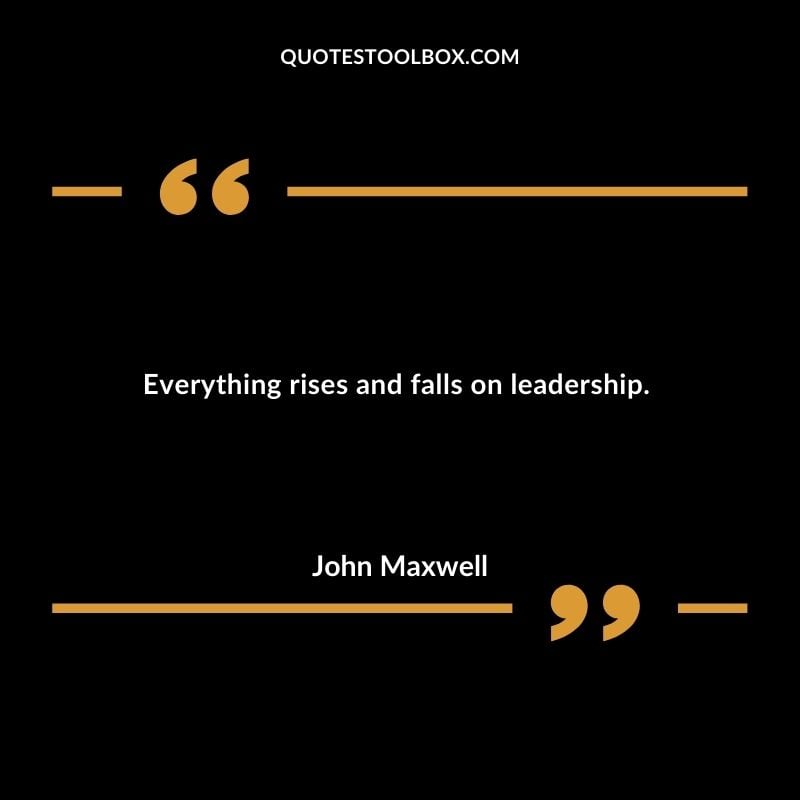 Everything rises and falls on leadership. John Maxwell 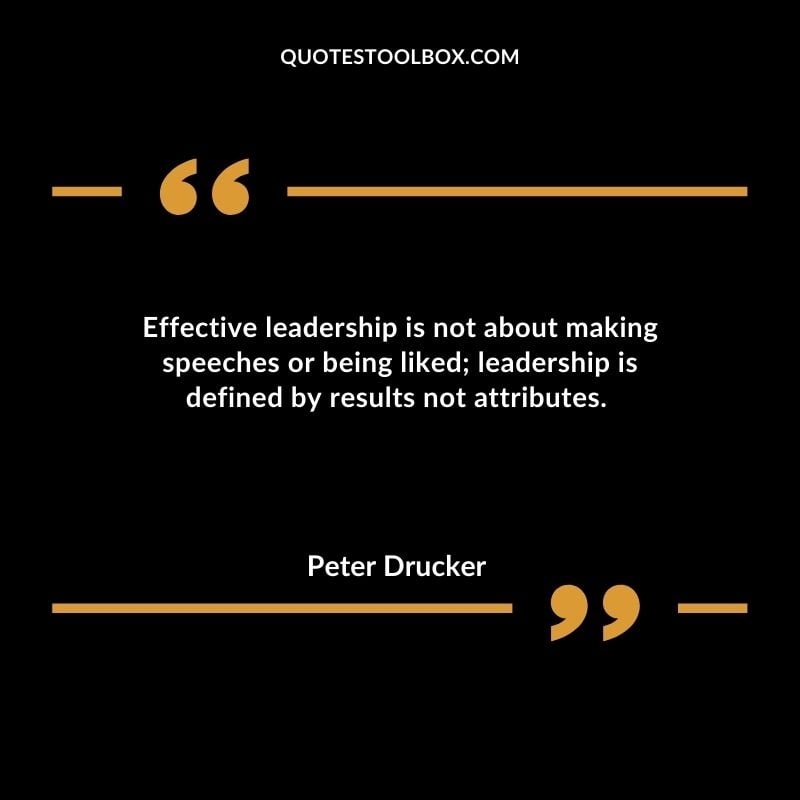 Effective leadership is not about making speeches or being liked; leadership is defined by results not attributes. Peter Drucker Quotes 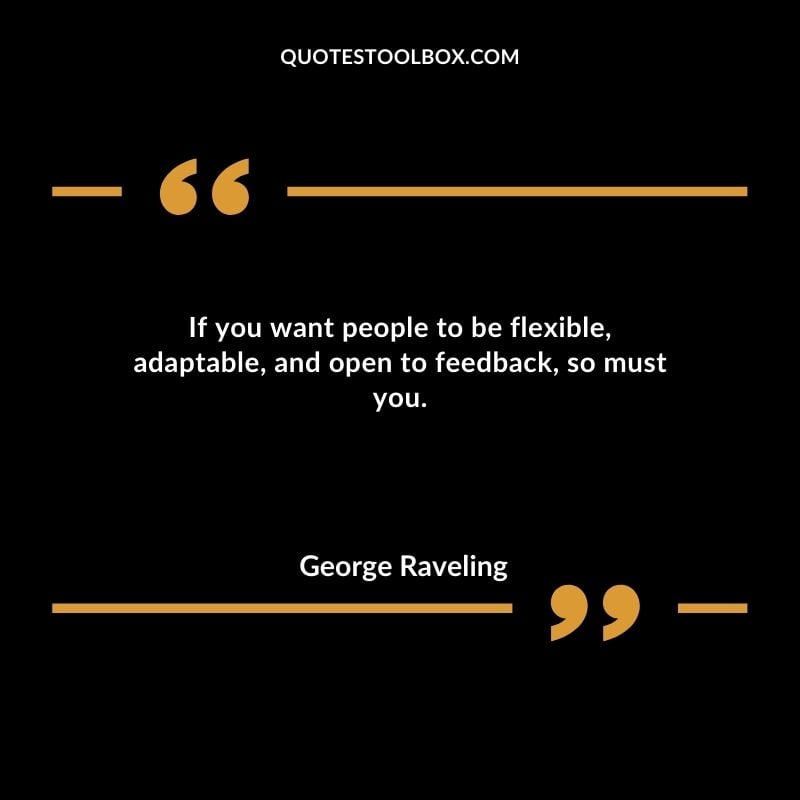 If you want people to be flexible, adaptable, and open to feedback, so must you. George Raveling 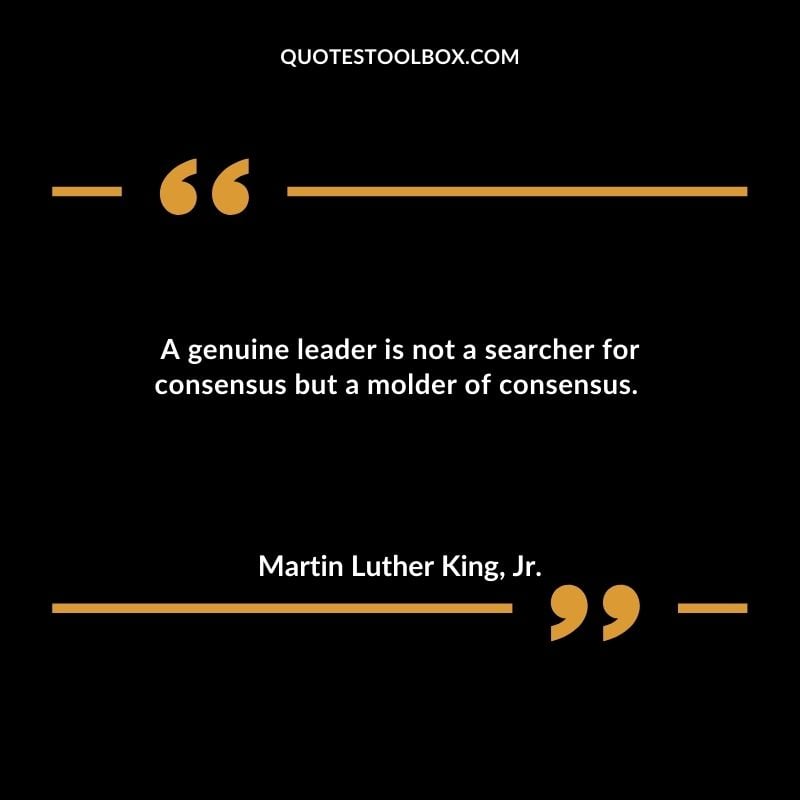 A genuine leader is not a searcher for consensus but a molder of consensus. Martin Luther King, Jr. 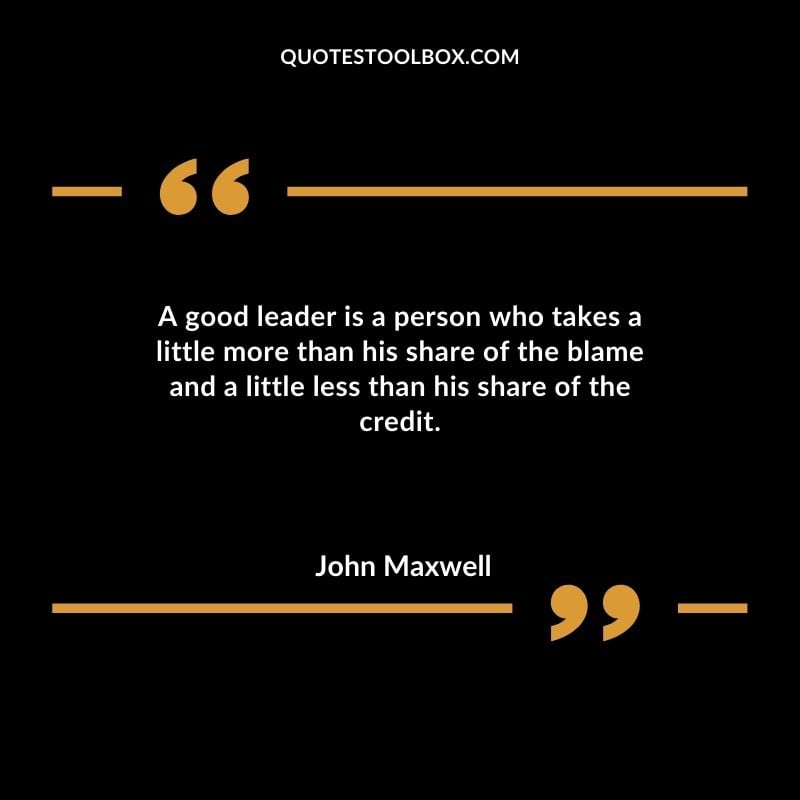 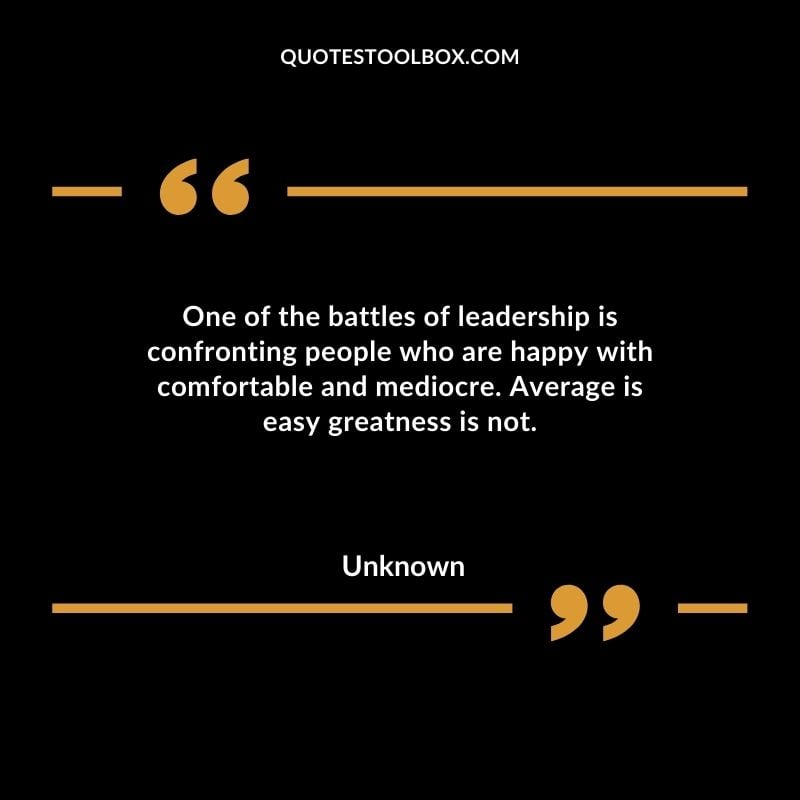 One of the battles of leadership is confronting people who are happy with comfortable and mediocre. Average is easy greatness is not. Unknown 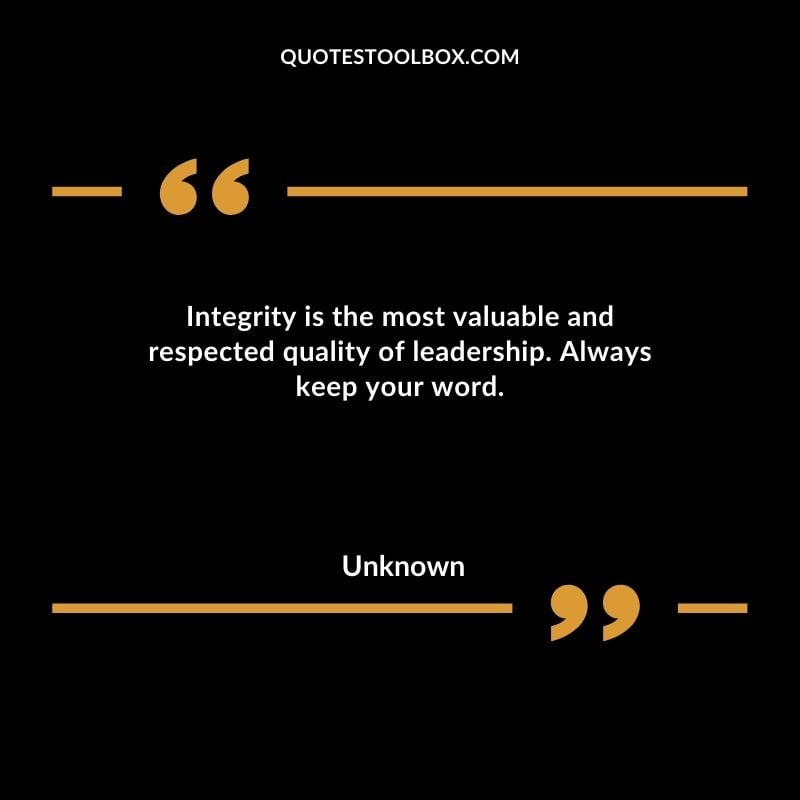 Integrity is the most valuable and respected quality of leadership. Always keep your word. Unknown 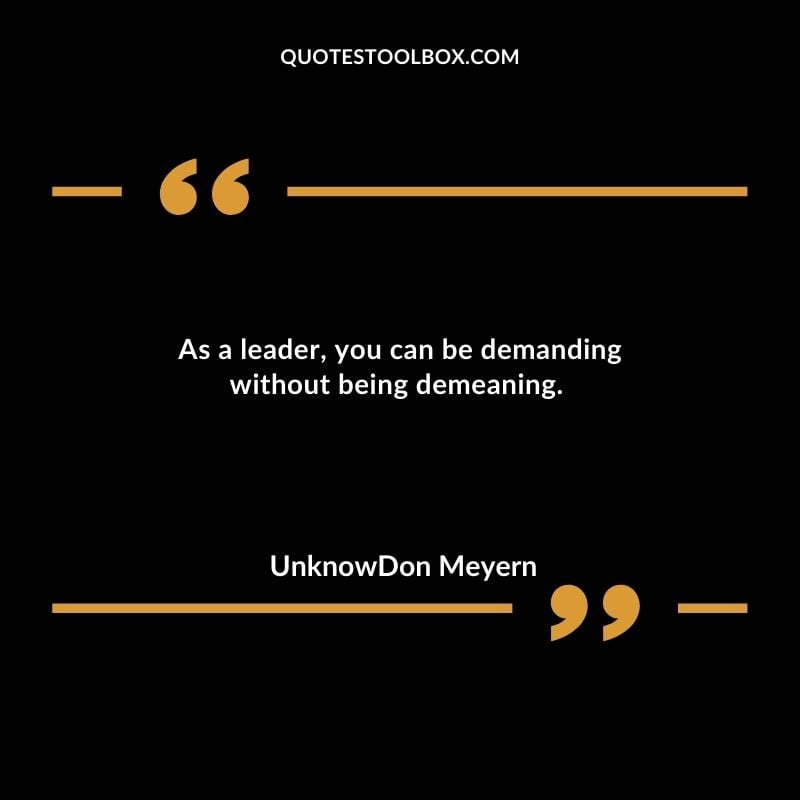 As a leader, you can be demanding without being demeaning.  Don Meyer 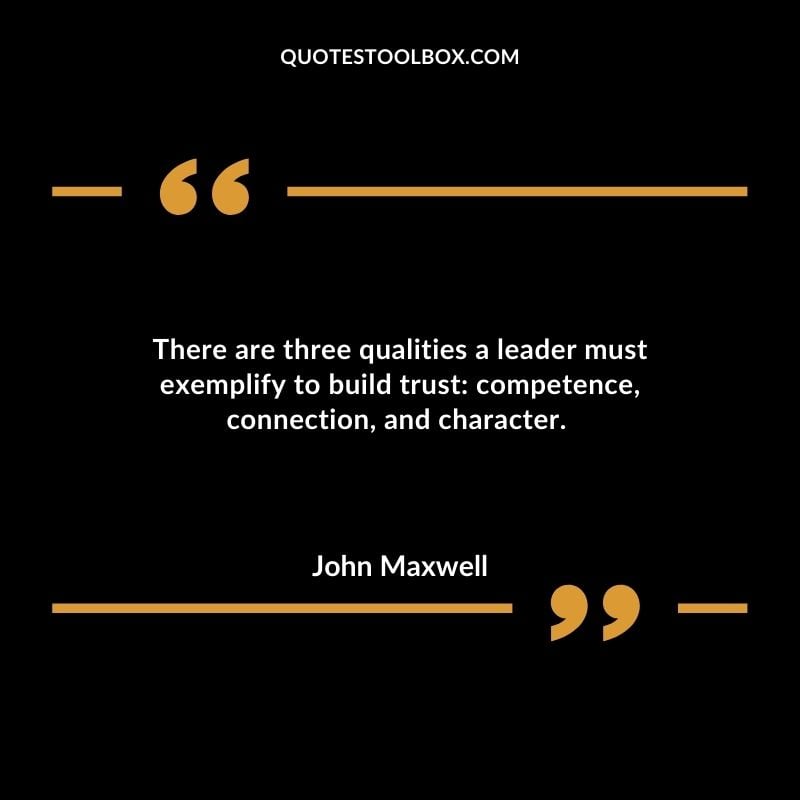 There are three qualities a leader must exemplify to build trust: competence, connection, and character. John Maxwell 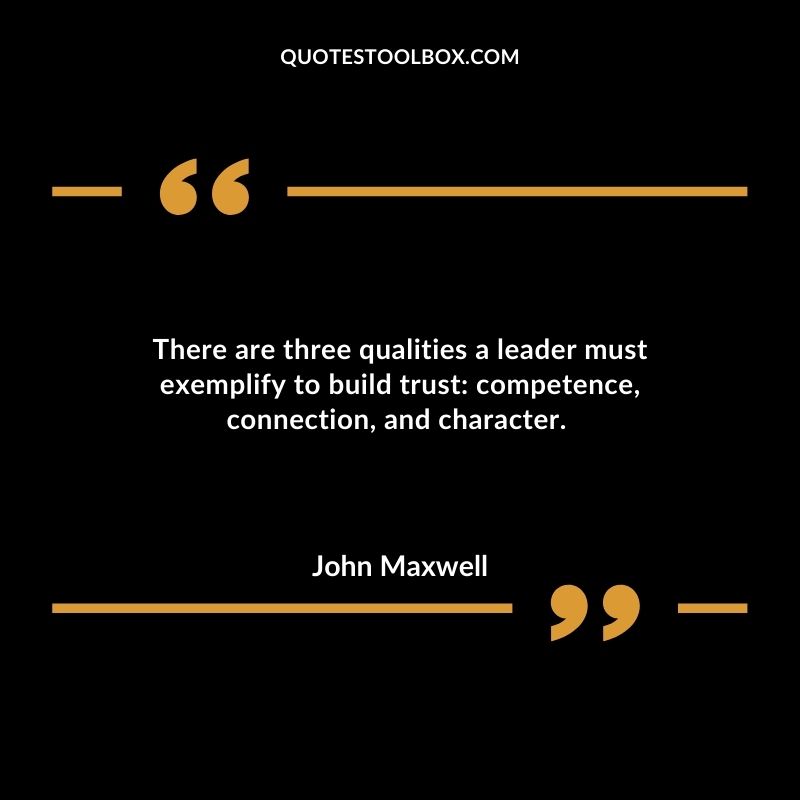 Leadership is about making others better as a result of your presence and making sure that impact lasts in your absence. Sheryl Sandberg

Leaders aren’t born, they are made. And they are made just like anything else, through hard work. That’s the price we’ll have to pay to achieve that goal, or any goal. Vince Lombardi 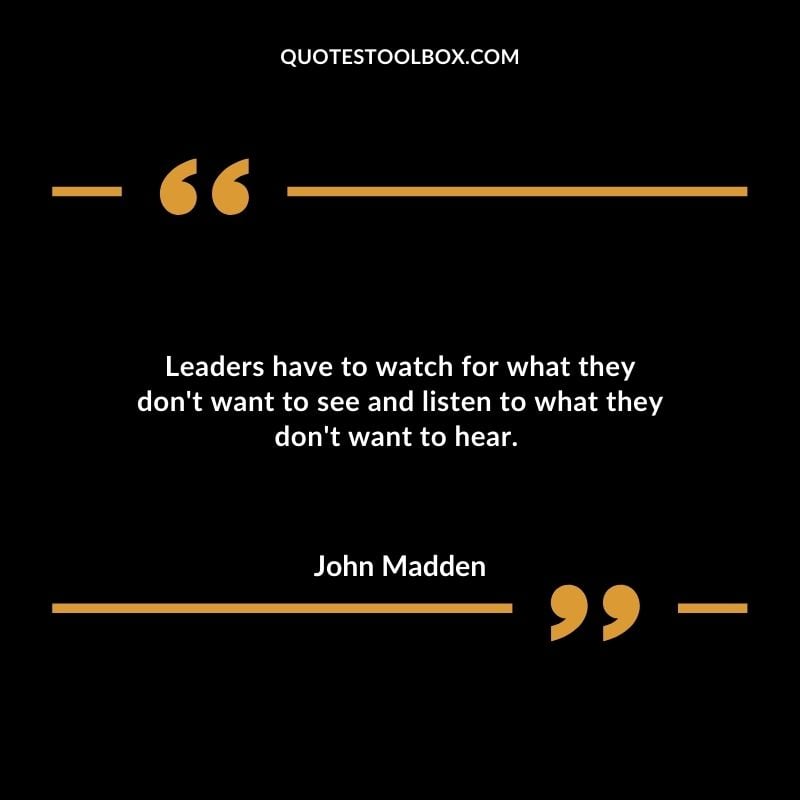 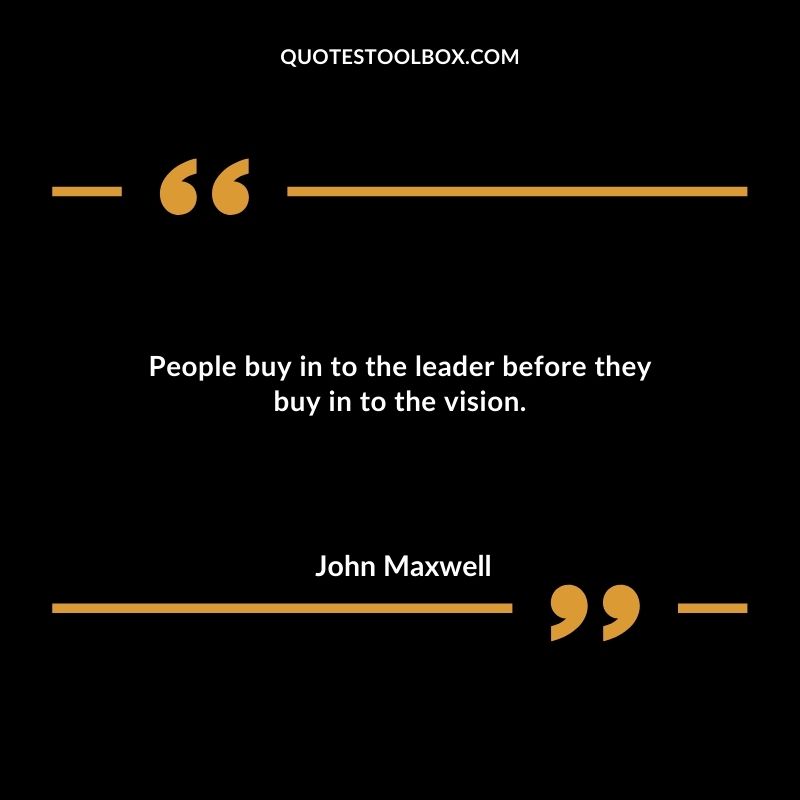 You get the best efforts from others not by lighting a fire beneath them, but by building a fire within. Ben Nels
Visualize a wagon wheel as a complete team. A leader might be the hub of the wheel at the center. Now suppose the spokes are the connecting relationships the leader is building with people on the outer rim of the wheel. If the hub is removed, then the entire wheel collapses. In a situation like that, if a team loses the leader, the entire team collapses. Mike Krzyzewski
Leadership must be demonstrated, not announced. Fran Tarkenton
The first responsibility of a leader is to define reality. The last is to say thank you. In between the leader is a servant. Max de Pree
Believe Big. The size of your success is determined by the size of your belief. Think little goals and expect little achievements. Think big goals and win big success. Big ideas and plans are often easier—certainly no more difficult—than small ideas and small plans. David J. Schwartz
Leadership requires deep systematic, analytical thought. Today’s environment is so fluid and unforgiving that deep thought is a must! Kevin Eastman
I don’t go by the rule book…I lead from the heart, not the head. Princess Diana
I suppose leadership at one time meant muscles; but today it means getting along with people. Mahatma Gandhi
During critical periods, a leader is not allowed to feel sorry for himself, to be down, to be angry, or to be weak. Leaders must beat back these emotions. Mike Krzyzewski
You must be personally reliable before you can lead your team to generate reliable results. Lee Colan
Leaders have to give time for relationships. But more demands will be placed on their time as they become more successful. So if a person’s success is based on developing relationships, then they have to continually find new ways of getting it done. Mike Krzyzewski
When problems confront successful leaders, they get excited about the opportunity. John Maxwell
Leaders who make excuses shouldn’t be surprised when their team members start to offer them too. Gary Curneen
Management is doing things right; leadership is doing the right things. Peter Drucker
You can say whatever you want to say to try to get somebody to believe you. Probably won’t work. At the end of the day, trust is gained. Bill Gates
Leadership isn’t about getting your own way, it’s about helping others find theirs. Unknown
In all forms of leadership, whether you are a coach, a CEO, or a parent, there ar four words that, when said, can bring out the best in your team, your employees, and your family. I BELIEVE IN YOU. Those four words can mean the difference between a fear of failure and the courage to try. Mike Krzyzewski (Also posted in Coach K Quotes)
You don’t lead by pointing and telling people someplace to go. You lead by going to that place and making a case. Ken Kesey
Relational skills are the most important ability in leadership. John Maxwell
Leadership and learning are indispensable to each other. John F. Kennedy Quotes
No one will make a good leader who wants to do it all themselves or get all the credit for doing it. Andrew Carnegie
Leadership is not about your ambition. It is about bringing out the ambitions of your team. Cheryl A. Bachelder
Leadership should be born out of the understanding of the needs of those who would be affected by it. Marian Anderson
In leadership, there are no words more important than trust. In any organization, trust must be developed among every member of the team if success is going to be achieved. Mike Krzyzewski
Do not follow where the path may lead. Go instead where there is no path and leave a trail. Muriel Strode
The first person I have to lead is me. John Maxwell
The five C’s of leadership: 1) Clarity 2) Communication 3) Collaboration 4) Commitment 5) Culture Farshad Asl
What I’ve really learned over time is that optimism is a very, very important part of leadership. Bob Iger
If you believe in someone, let them know. They can gain tremendous strength and energy from your belief. Unknown
In the end, people are persuaded not by what we say, but by what they understand. John Maxwell
If anything goes bad, I did it. If anything goes semi-good, we did it. If anything goes really good, then they did it. Paul “Bear” Bryant

What Makes a Good Leader?

An effective leader develops the ability to correctly identify the pertinent detail or details incidentals in a market, industry, or sport that might create an incremental advantage. John Wooden
Great leaders…are a spark of energy and enthusiasm. They raise the level of everyone in their organization, every day. Alan Stein
The supreme quality for leadership is unquestionable integrity, Without it, no real success is possible. Dwight D. Eisenhower
A leader is one who knows the way, goes the way, and shows the way. John Maxwell
Leadership is solving problems. The day your people stop bringing you their problems is the day you have stopped leading them. They have either lost confidence that you can help or concluded you do not care. Either case is a failure of leadership. Colin Powell Quotes
Leadership is the capacity and the will to rally men and women to a common purpose and the character which inspires confidence. Bernard Montgomery
The job of a leader is to teach others to see vitality in themselves. Joseph Campbell
Innovation distinguishes between a leader and a follower. Steve Jobs
Leadership is having people look at you and gain confidence seeing how you react. If you’re in control, they’re in control. Tom Landry
A leader is a dealer in hope. Napoleon Bonaparte
Effective leadership is putting first things first. Effective management is discipline, carrying it out. Stephen Covey
Leadership is not about titles, positions or flowcharts. It is about one life influencing another. John Maxwell
Leadership is hard to define, but you know it when you see it. Morgan Wooten
If your actions create a legacy that inspires others to dream more, learn more, do more, and become more, then you are an excellent leader. Dolly Parton
A good leader takes a little more than their share of the blame, and a little less than their share of the credit. Arnold H. Glasgow
The best leaders immerse themselves in both teaching and learning. Growth comes by both. Kevin Eastman
Leaders are those who empower others. Bill Gates
A good leader can engage in a debate frankly and thoroughly, knowing that at the end he and the other side must be closer, and thus emerge stronger. You don’t have that idea when you are arrogant, superficial, and uninformed. Nelson Mandela
Leadership is giving out far more than one expects in direct return. The rewards are intangible, yet priceless. T. Jay Taylor
Leadership is influence. Nothing more. Nothing less. John Maxwell

Start with Why: How Great Leaders Inspire Everyone to Take Action